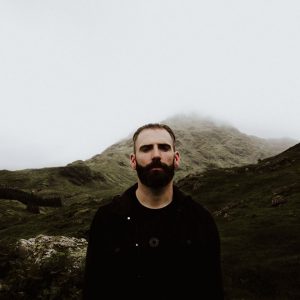 Saor is the folk/black metal one-man band of Scottish musician Andy Marshall. It seems to be quite the labor of love considering the quantity and quality of his work since 2013. Forgotten Paths is the fourth full-length documentation of his Scottish heritage, featuring long suites of poetry and extremity with an emphasis on nature and the melancholic. Having also heard his previous full-length Guardians, I was well-prepared for something grand and passionately composed. I wasn’t surprised.

I took this album on a walk a couple times, as I often do when approaching new music. I try to imagine a particular scene or picture to complement what I’m hearing. It could be a picture based on the album sleeve, or something completely fabricated. The cover art in this case is too common of a theme for folkish metal, although it fits the music perfectly. Everything about Forgotten Paths is pastoral, sad, and foreboding. Dramatic black metal riffs sail skyward over the ears while acoustics serenade close by in the listener space, exuding sorrowful divinity.

There’s a story being told here; these four tracks unfold linearly like chapters. I’m not sure what Marshall screams and croons about, but there’s a femininity in the folk passages that sits between walls of wintry darkness. Melodious strings accent the extremity like feathers on distressed angels. Despite this musical duality, folk and metal share the same wings, passing over long sound valleys with minimal changes to the landscape. Acoustic and electric instruments are there to serve the grandiosity of each riff, rarely trailing off to solo or embellish.

And so here I am walking, trying to think of something other than a mountain image to assign to these tracks. It’s not until my first listen to the gossamer outro “Exile” that it hits me — a scarlet leather-bound book half-buried in the sand on the seashore of a North Atlantic archipelago. Pages are yellowed, writing barely legible, maps with missing pieces. Forgotten Paths is a mysterious tale set in an unknown wilderness. There are angels and demons, coffins lying beneath the weeping of eternal autumns. It’s an ancient air captured by modern machines, like digital reconstruction of a love letter carved into a tree.

With all that being said, this type of album honestly doesn’t do much for me. I enjoyed the music, but it doesn’t hit the buttons it needs to. I personally like my black metal to have a certain degree of venom. This is rather melodramatic music, and the overall sadness behind the riffs drips with something emotionally frail. That’s fine when dealing with gothic music. This is black metal. I want to hear the fires of Mordor. I don’t want to hear Liv Tyler’s Arwen pleading with Aragorn to stay and hold hands with her by a Rivendell waterfall.

My personal tastes aside, this remains very well composed, expansive, and atmospheric black metal music for those interested in this type of emotional journey. Saor has a very particular set of inspirations and if they jive with you, I can practically guarantee that he’ll be a consistent and reliable artist to dig into.