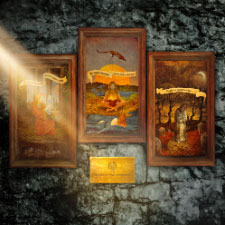 The review you’re about to read is not the review I originally wrote for this album. After a few listens to Pale Communion, I’ve decided to go easier on Opeth and cut out much of my vehement anger. Instead, I’ve chosen a jaded view. This is definitely not the album that I wanted to hear from these guys, and my review focuses more on my own disappointment in Opeth’s direction, and not on the quality of the music itself. This band was one of my all-time favorite metal bands. I’ve always held them on the highest pedestal. Because of the band’s recent musical decisions, I’ve become listless and bored. I want to tell people why.

Firstly, let’s get the positives out of the way. If you strip Opeth’s name from this album, it becomes relatively solid and enjoyable. The musicianship is tight as always, the production is clean and it succeeds in what it sets out to do. For a person that isn’t familiar with the sound of progressive rock, this music seems new and original, and I understand why the album has garnered some praise. Even if you happen to be familiar with progressive rock, this album still makes the grade as a good prog release.

As I said before, the album succeeds in what it set out to do, and that’s exactly the problem that I’m having. Opeth set out to make a mediocre, average progressive rock release. They’ve decided that it’s too much work to continue to be one of the most unique and influential bands in the extreme metal genre and would rather attempt to stand shoulder to shoulder with 1970s prog rock giants. The result is music that sounds like an encyclopedic representation of what those prog rock giants have already created, with all of that genre’s penchant for experimentation and exploration sacrificed.

Opeth has done nothing here that other bands haven’t already done. That’s a far cry from their previous albums. They used to be a band that strived to pave their own path, and their desires to break from the mold resulted in incredibly original heavy metal. Pale Communion is Opeth shedding themselves not only of their heavy metal attributes, but of their uniqueness and progressive leanings. By abandoning their defining motif of light and shade; by sacrificing 50% of what made the band special; they’ve succeeded in becoming a band running on half power.

Like it or not, acoustic beauty and pummeling brutality was Opeth’s specialty. Combining moments of miserable prettiness, depression, and nature’s serenity with moments of hellish evil, murderous rage, and nature’s unforgiving wrath is a musical subject that Opeth could have continued with indefinitely. The relationship between good and evil; beauty and malice; light and dark – it’s a tension that yields a great amount of drama. Opeth represented this in their music in such authentic fashion, by marrying death metal and pastoral acoustics. But on Pale Communion, the darkness has been almost completely shed, leaving the lighter moments to take over their sound. Any attempts at their darker side feel mopey, corny and dated.

I miss the death in Opeth. I miss the growls and I miss the vicious riffs. And if Mikeal didn’t want to explore that part of his music further (which I have to understand and respect), than I wish the Opeth name was discontinued. Fans say they don’t care that Mikeal isn’t performing death growls any longer. Sometimes I get the feeling that those people are trying to convince themselves that the death growls weren’t what made Opeth special in the first place. Obviously death growls aren’t original by themselves, but it was the way that Opeth incorporated them that made them so powerful and essential to their music. Face it, when Mikeal belted out a devilish, guttural scream after a light-hearted moment, you got fucking goose bumps every time. There was raw, genuine and convincing evil in that voice. Mikeal plays the angel well, with a delicate croon that floats over soft passages like birdsong over a garden. But the transition into something incredibly loud and menacing, then back into whimsy and wonder was always what made this band special. So many bands can play softly with progressive efficiency. So many bands can play ferociously with dark and abysmal atmospherics. Nobody played both cards like Opeth. And if Pale Communion tells me anything, it’s that Opeth is slowly but surely going to taint that uniqueness — one soulless, safe and monotonous Hammond organ solo at a time.

In conclusion, I really just miss my favorite band. If I want prog rock, I have thousands of albums to listen to. If I want Opeth, all I have is nine incredible albums to listen to. It will do for now, but I hope one day that a tenth, eleventh and twelfth proper Opeth observation comes along. And if not, I can at least hope that Mikeal realizes that it’s probably better to retire the Opeth name if he wants to continue to create 1970s prog rehash.