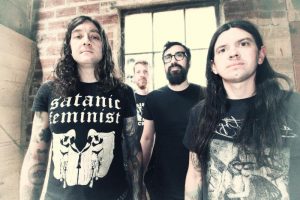 On Friday August 18th, Alternative Control talked with up-and-coming doom band Usnea before their set at Psycho Las Vegas.  The Portland, Oregon outfit — which includes guitarist/vocalist Justin Cory, bassist/vocalist Joel Williams, guitarist Johnny Lovingood, and drummer Zeke Rogers — releases their third full-length album Portals Into Futility this Friday on Relapse.  They will also be embarking on a European tour with Ufomammut at the end of the month.

We talked at a bar in the Hard Rock Hotel, about topics ranging from science fiction novels to medicinal plants.  The excerpts below have been edited for length and clarity.

How do you say your band name?

Justin: The actual pronunciation guide you’ll see on Wikipedia or the dictionary say “uhs-nea,” but because it is a lichen and it’s used medicinally, […] the herbalists demand that it’s said “oosnea.”  So we just don’t really care.  [laughs]

How do you guys say it?

Justin: It varies, it alternates on how drunk we are.  If I’m drunk, I say “Oos-nea.”

Zeke: We were trying to come up with a band name and I was looking at lists of medicinal things, and I was like, “That’s a pretty cool sounding word.”  Thinking of a band name is kinda hard, and I was thinking of that band Laudanum — I liked that name, it’s just an old drug that’s not used anymore, and that’s what got me started down that rabbithole.  […]  We looked it up and it was fitting because it’s a lichen that’s very prevalent in the Pacific Northwest.  […]

Joel: The nickname of it is Old Man’s Beard.

Johnny: You can use it as a band-aid or toilet paper.

Joel: You could start fires with it.  People eat it too.

Justin: Like he said, it’s prevalent in the forests in the north, like Oregon, Maine, and also in Scandinavia.  It’s the stuff that looks like it’s dripping off the trees, so it’s got a black metal vibe to it too — like artwise, dripping trees and stuff.

What appealed to you about funeral doom as a genre?

Justin: All of us similarly came from punk at first.  As you get older, y’know, underground music is bigger than punk.  And punks often tend to get into metal because I think you get sick of the punk formula after awhile — and punk as a music hasn’t evolved as much as metal has.  I still love punk music, I’m not trying to bad mouth it, but metal has been willing to morph in so many different directions and I don’t think punk has.

When you’re looking for more extreme music, it just takes you down a wormhole.  Funeral doom and certain kinds of death metal and black metal are extreme forms of music that the average listener finds to be atonal and unpleasant.  If you’re into that kind of expression, that’s why you go down that direction.

Got to talk with @usneadoom today, interesting guys! Funeral doom isn’t a genre I’m familiar with, but they opened my eyes/ears to it. They’ve got an album coming out in early September and are touring Europe soon as well. Stay tuned for the writeup! #usnea #usneadoom #doommetal #funeraldoom #extrememetal #portlandoregon #pdxmetal #vivapsycho #psycholasvegas2017 #psycholasvegas #metalheads #earsplitpr #relapserecords

From a musical standpoint, how to you go about composing a ten-minute or twelve-minute song, or one that’s even longer?

Justin: I think another thing with the length of the songs is that we, like a lot of doom bands, write a riff that we really like and we milk it, but you also want to evolve out of that riff into something else.  We don’t usually repeat a riff — we don’t go back to that riff five minutes later.  We feel like the song evolves and goes in a direction, and when it feels like it’s complete that’s when it’s complete.  […]

On our new album, we have a twenty-minute long song.  It wasn’t written intentionally to be twenty minutes, it just kinda went there.

Zeke: […] It’s more like Point A to Point B — it’s not verse/chorus/verse/chorus/bridge.  It’s more of an epic journey or a progression.

Joel: We ride the feeling.

Zeke: […] You could definitely get carried away with that kinda thing.  Sometimes it’s just like, “Should we end the song?  Is this the last riff?”  [laughs]

Can you talk about your lyrics and the literature you draw from?

Joel: We’re book nerds.  We can’t help but put some of that into what our lyrics are like.  We’re also aware of science and politics, and we inject all the stuff we’re into in the lyrics, kinda like uncontrollably.  [laughs]

Justin: We have opinions that are strong, but we also […] don’t intentionally make the band a vehicle for political thought or expression.  At the same time, you can’t help but be influenced by what you’re thinking about in the world and what your philosophies are.  […]  We’re not trying to preach at people, […] but it does find its way into the lyrical format.  We don’t just want to sing about Satan and burning churches all the time.

Joel: We have songs about sci-fi novels, like Dune and —

Zeke: I think the cool part about sci-fi is that it’s good at casting a light at what’s happening now, so it’s often a different way of looking at humanity and the way things are structured.  […]  Some of our songs focus on the dark aspects of that.  That’s one thing that I’ve always liked about sci-fi, it’s not necessarily overly political —

Zeke: Maybe I mean like not political in a partisan way —

[Conversation turns to The Handmaid’s Tale by Margaret Atwood…]

Joel: One of our songs, my lyrics are actually influenced by that.  […]  Sometimes reality ends up becoming these warnings that we were issued.

Your video for “Pyrrhic Victory” came out at the exact same time that nuclear aggression involving North Korea was in the news.  Was that just a crazy coincidence?  [laughs]

Joel: It is coincidental, but that song is influenced by a Philip K. Dick book called VALIS — he’s a visionary, a pretty inspirational science fiction writer, but he had a very paranoid view of the world.  Did a lot of drugs…  So that song has a claustrophobic paranoia that we wanted the video to have.  It just so happened that it coincided with world events that were pretty surreal.

Surreal indeed.  Usnea performed that afternoon at Vinyl, delivering their foreboding sounds to an eager crowd.  Visit them on Facebook and the web to hear their warnings for yourself.