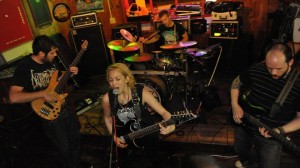 Black Table, with Mellon at left.

Bass players have a reputation as the underdogs of music.  Jokes abound about the groupie who was dumb enough to sleep with the bass player, the bass player who got locked in the car with the keys, the bass player who just played E… In fact, in a recent interview on a popular metal blog, one bassist of a well-known band said that he doesn’t practice his instrument and that he just tries to copy what the rhythm guitarist does, at half-tempo.  (Face-palm.)

But Matt Mellon of NY/NJ experimental band Black Table is one of many metal bassists who don’t fit this stereotype.  Whether it’s through elegant melodies in or intense runs, it’s his playing that creates a lot of the motion in Black Table’s sonic landscapes.  Alternative Control had the opportunity to ask Mellon a few questions about his band and his approach to the low end…

Alternative Control: Tell me a little about the background of Black Table — when you guys got together and so forth.

Matt Mellon: The band started roughly 2 years ago I think. Basically Ryan (guitars) and Mers (guitars/vox) had some songs written and they asked Mike (who was playing drums in another band with Ryan at the time) to join. I guess they had some dude play bass for a little but it didn’t work out so Mike recommended me to them because Mike and I played together in my old band Mabus. We met in a kind of funny situation a while back. We both went to SUNY New Paltz where he found me somehow via Myspace because the band he was in at the time was looking for a bassist, so he asked if I was interested. At this point Mabus coincidentally, was looking for a drummer so I asked if he would be more interested in doing that. And he was. So we basically pulled a reversal move and stole Mike from his band. He played with us for a few years and then when that project came to a stop and I wasn’t doing anything musically, he contacted me. They sent me the songs they had demoed, I wrote some parts and went to practice with them at the decrepit haunted house of a practice space they had. The first time I went it was like 9 p.m. so it was pitch black out, I pulled up to the address they gave me, it was this creepy old beat down house in the middle of the woods and nobody was there. I was pretty close to going home but they showed up, we jammed and it went well…

AC: What is Black Table’s song writing process like, and what is your role in it?

MM: Mers and Ryan will usually write most of the parts in a rough structure at home and send Mike and I mp3s so we can get an idea of what’s going on before we meet up. They have a good style of harmonizing and writing stuff that gives me a lot of space to write my own parts within the song, so I sort of let them do their thing then work around it. When we all get together at practice I listen to how Mike approaches the riffs and sort of write to what he’s doing while matching up with guitars when necessary. I’ll kind of get basic rhythms for parts down and gradually build melodies around that. I’ve been really trying to focus more on the bass as its own instrument rather than just something to give the music more depth. So I’ve been trying not to follow the guitar riffs completely and play stuff that compliments the song but sounds awesome with or without the rest of the music. Obviously it’s not going to always work out that way but it really does add another dimension to the music and makes it more challenging and fun to play.

AC: You’re clearly doing a lot more than just playing the E string in Black Table. What are some of your musical influences? And how did you develop your unique approach to the instrument?

MM: When I started playing, at 14 I think, I took lessons for a month or two. I learned some Rage Against the Machine songs and a couple scales but I was too young to take the instrument seriously, so I quit. I was already playing in a band at the time so everything I learned from there on was self-taught or from just playing with different people. In Mabus we dealt with a ridiculous amount of lineup changes so as unfortunate and as annoying as that was, I got to play with a bunch of great guitarists and drummers and picked up a bunch of different things along the way. We were doing mostly tech metal/grind stuff with jazz/prog influence so I got accustomed to playing fast and heavy with a lot of time signature changes and then going into something slower, weird and jazzy. That stuff pretty much shaped my style of playing early on I guess. I was absorbing a ton of different music during those years because we were playing with all kinds of grind bands and stuff like Sawtooth Grin, and then at home my dad would be putting me on to King Crimson and Return to Forever. So our influences were really all over the place.

Over the past few years I’ve been listening to more things that aren’t metal, mostly jazz, some funk, older prog rock, and anything where bass plays a more predominant role. With it being more bass-focused there’s usually a lot of cool things going on like tapping, chordal progressions, and different slapping/plucking techniques that you don’t always get in metal. I’ve been trying to incorporate some of those things in my stuff because I think just looking for influence, or even listening to one style of music can hinder your style of playing. And metal isn’t the greatest style of music to find bass inspiration, but I think recently it began taking on a more important role. As far as metal goes though I love Dan Briggs’ style and tone (from Between the Buried and Me/Trioscapes), as well as Joe Lester of Intronaut, Jeroen Paul Thessling’s work in Obscura, Erlend Caspersen from Spawn of Possession, and of course Alex Webster and Steve DiGiorgio. Lately I’ve been studying a lot of Victor Wooten stuff; he’s probably one of my biggest influences as far as technique goes and his perspective on music and the bass in general is definitely inspiring. I also listen to a lot of Jaco Pastorius and Stanley Clarke, who both have had a big impact on my playing.

AC: What do you use for gear?

MM: Right now I’m playing an Ibanez SR1006EFM, it’s a 6-string bass. It was sort of an impulse buy at the time because I had just started a new job and had some money in my pocket and I really liked it when I played it. I was in between bands when I got it so I had some time to get comfortable on it because I was playing an Ibanez BTB 4-string primarily before that. The 6 is a great bass but the body and neck are both maple so it sounds nice and bright, but it’s pretty heavy. I’ve been looking into getting something else but have no idea what yet. For amp and cab I’m using Ampeg stuff right now. The amp is the B2re and the cab is your basic 8×10. Ampeg stuff is tight because it’s reasonable price-wise and it sounds great. Plus it’s pretty durable — I’ve been playing the same rig for a long time, touring and just locally, and have never had an issue. The only downside with the 8×10 is that it’s just a pain in the ass to lug around. As far as pedals, I use a Boss RC20XL Loop Station and a MXR Analog Delay which are both great. 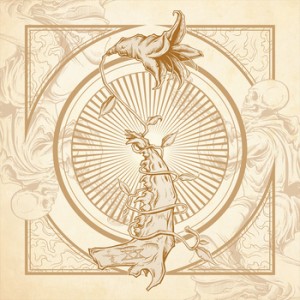 AC: I saw on the internet that you designed the band’s t-shirts and album cover. What else do you do when you’re not playing bass?

MM: Yea, I did. I do freelance illustration/graphic design stuff when I’m not playing or working a real job. I’ve been drawing forever, so I studied graphic design in college because I figured it would be a more lucrative career choice rather than studying drawing. I enjoy drawing way more though. My main job is 100% computer-oriented, so when I get home it’s great to sit at the table, detach from the digital world, listen to music, and let my mind wander. I’ve had a couple shows for my stuff and sell some online. You can check my stuff out at www.mattmellon.com. Other than that I’m a pretty boring dude. I usually go hiking in the mountains here and down near the river or sit at home watching western movies and drinking bourbon.

AC: What the heck is a deep-well kit?

MM: It’s a whole package of stuff based around a 20-minute ambient-experimental-noise track we did. It’s all hand made by the band, includes a CD of the track, incense, a candle, mirror, and a scroll with a spell that, when done correctly, should reveal a past life. Personally, I have yet to try it because I know it’s just going to tell me I was a gunslinger in some frontier mining town. People seem to love it though. It’s been a good seller I think due in part to its originality and handmade packaging.

AC: Why do you guys burn incense at your shows? (Which I think is awesome, by the way…)

MM: Because we fart a lot. 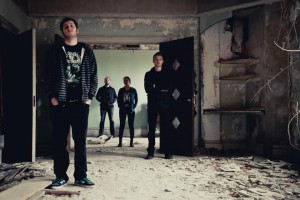 They let the bass player stand in the front! From left: Mellon, Fleming, Sumida, and Kadnar.

AC: What other bands would you recommend to Alternative Control readers?

MM: I’m lucky to live in an area with an incredible amount of awesome local bands. There are probably too many to name but I would highly recommend my homies in Tiger Flowers, Ecco 3, Living Laser, My Bitter End, Necroptic Engorgement, the Binary Code, Dead Channels, Dead Empires, Black Water, Headsnatcher, So Hideous, and Swordmasters of Ginaz. I’m sure I’m forgetting some others. If you’re a bassist and haven’t checked out the stuff I mentioned earlier, I would definitely recommend that stuff as well.

AC: What does Black Table have planned for 2013?

MM: Since the Sentinel EP just came out, there’s going to be a lot of shows coming up. We’re putting the EP out on vinyl which just went to press this week, and I’m really looking forward it. Not only is it my first recording on vinyl, but I did the artwork for the cover as well so it’ll be hanging on my wall for sure. We have a bunch of shows already lined up for February and are looking at touring in March towards the south west.

Before they venture out west, Black Table has a ton of shows coming up in the tri-state area.  Go to one and let us know what you think!