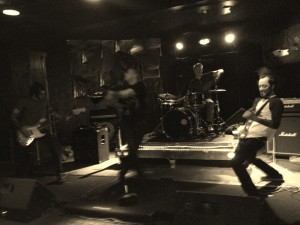 Right now in many underground music scenes across the country, loud, noisy rock is making a comeback. Bands are re-discovering the joys of being aggressive and weird. Intercourse, from New Haven, are one such band keeping this flame alive in the Elm City.

The band, which features Tarek Emad Ahmed on vocals, Kevin King on guitar, Conor Lambert Dabbs on bass, and Billy Crystals on drums, formed with the intention of creating music that was unique and very noisy. After one listen to their EP, which they will be releasing on cassette Saturday, December 6 at Three Sheets in New Haven, along with Grizzlor, Polluter, and MouthBreather, you will definitely hear that they accomplished this goal.

So with this cassette release looming we decided to send Ahmed and King some questions, pertaining to a whole variety of subjects such as their formation, the resurgence of noise rock and why cassettes and tie-dye, amongst others. Here are their collective answers below.

What were the motivations for starting the band? How did it come about?
We wanted to play shows again. We met up again through a mutual friend on a drive to Albany, NY to see Black Flag and then formed because of our mutual appreciation of weird punk (Germs, Suicide), 80s hardcore, particularly the Tex-Ass scene (MDC, Dicks, Butthole Surfers), heavy noise rock like Unsane, Cows, Jesus Lizard, and a lot of the noisier 90s metal/hardcore such as Deadguy and Converge.

Does the name have any significance? Were you looking for a provocative name to fit the music?
We were trying to think of a name and literally everything you try and think of at this point is either taken or sucks. So, one day my brother was like, “You guys should name your band Intercourse.” We were all just like, “Eww,” so we used it.

Also, the music touches on a few loud rock sub-genres. Was it the band’s intention to mix up a bunch of sounds to form a monstrous hybrid?
We set out to be noisy, period. Never really understood the point of starting a cookie cutter band.

Why are you putting out the EP on cassette? Also, why is your t-shirt a tie-dye? Did you want to do something different than the usual loud rock band t-shirt? A warped sense of humor perhaps?
We wanted to do a 7″, but it was just out of our budget. We didn’t see the point in pressing CDs because they seem so disposable. Anytime I’m given a CD I’m like, “What the fuck am I gonna do with this? Put it on my iTunes and lose it?” As for the tie-dye they’re a lot of fun to make and we’re 100% serious.

Are there plans for a follow up recording? Possibly a full length? Or is it too early to talk about this yet?
The next release will be a four-way split 7″ coming out by late winter. It is with three Richmond, VA bands: New Turks, NAVI, and Soft Time.

The lyrics portray are very twisted view of the world. Who comes up with them? And what you are trying to put across through them?
I’m just trying to have fun with the lyrics. Occasionally an opinion on a world event or somebody’s shitty beard get in there.

In addition to your band, there are other bands in CT such as Grizzlor and Sperm Donor, amongst others, keeping it loud and weird. Do you think this is the start of a noise rock scene in the state? Why or why not?
There’s definitely a scene in that there’s a group of bands that play together and/ or attend each other’s shows when they aren’t on the same bill. Those bands are heavy as shit and everyone should listen to them! Noise rock seems like it could make a resurgence with the popularity of bands like Pissed Jeans and Big Ups. Also, there is the Amphetamine Reptile documentary Color of Noise. Usually, that’s when shit gets really lame though, so we’ll hope it stays where it is.

What are the future plans for the band?
We have plans to write and record more, possibly a full length, possibly an EP. We’re aiming for a vinyl release.