An instrumental trio with two Chapman Sticks and two guys named Josh walks into a bar…. And mesmerizes the audience with their virtuosic space metal.  I don’t know how to make a joke out of it, but that’s pretty much what happened at Fiddler’s Green this past December when Geph played.  Brought into our local fold by Westchester instrumental rockers Valence, this Boston outfit has been making sound waves across the region with their unique music.  After enjoying their performance at The Pluckening 2017, I sent the guys some questions about their upcoming album release, their plans for 2018, and of course their instrument of choice, the strange and futuristic Chapman Stick.

First of all, tell us about the mechanics of a Chapman Stick.  What the hell is it?  What do you do with all those strings?

Josh Goldberg: The Stick is basically an enlarged guitar or bass neck without a body.  It’s designed to accommodate 8 to 12 strings depending on the model and is played primarily with a tapping technique as the basic technique.  The range is huge, from a low B akin to a 5 string bass up to a high C or D like the 19th or 21st frets on the highest string of a guitar.

John Tyler Kent: Both of our instruments have 10 strings – 5 bass strings tuned in 5ths, and 5 melody strings tuned in fourths. Those two sides get sent out separately through a stereo output. The combination of the extended range and flexible routing offers nearly endless possibilities for arranging music.

Josh Merhar: It’s a headache I only need to deal with by proxy. As a drummer, it’s a lot to try and listen for. The Stick has stereo output so the bass side and treble sides of the instrument can run through two separate sets of effects and amps. It can sound like two entirely different instruments played by one person.

Second, how did this band end up forming with two Chapman Stick players?

JG: The Stick community is primarily online and relatively tight knit.  Tyler and I met through the forums when he posted an original piece of his and I had commented on his creative approach to using the Stick in his arrangement.

JM: When we first started playing, Tyler and I lived together in Boston. Tyler and I had jammed a fair bit (just drums and Stick) before the three of us started seriously writing music together, so I already had some idea of what the Stick could do. Tyler and Josh G. met through the small Stick community and it just kind of naturally progressed from there. Josh G. came to us with an almost-completed Splinter (from our first album) and we meshed really well. After that first song, we decided we needed to pursue this further.

Why do you choose to make instrumental music?

JG: I love instrumental music.  I became a musician because of video game music and that’s been a huge influence on my writing process.  I think the way the three of us think about the composition of a song and arranging allow us to make the most of our instruments and our talents.  For me, well written instrumental music feels complete even without a singer.

JTK: I think we all share an enthusiasm for hearing and creating new sounds that we haven’t come across before. It’s really exciting to let that new experience speak for itself, instead of worrying about trying to communicate to someone what exactly they should be making of the music.

JM: I always found myself more attracted to a musician’s ability on an instrument than the lyrical meaning of a song. That’s not to say I dislike music with singing. It’s just not always my number one choice, y’know? Until GEPH, I never got to write for or play in an instrumental band and that’s something I’ve always wanted to do. Playing and writing without a singer presents a lot of challenges in terms of composition and arrangement. And we like a challenge.

Is there a narrative or philosophy that goes with your music? (i.e. like the sci-fi adventure in Valence’s Laser Baron EP)

JG: There was in our first album.  We told a story about the world’s first Quantumnaut.  You can check out the whole thing on our bandcamp page.  This upcoming album won’t have one.  It’s cool to just be able to put out a collection of music you’re proud of too.

JTK: Our first album had a short sci-fi story to go along with the music on the bandcamp page. We decided against writing along to a specific story for this upcoming album. The title Apophenia refers to the tendency people have to perceive meaningful patterns and connections amongst unrelated events. This time around, we’re leaving it up to the listener to assign to our music whatever significance or definition they see fit.

JM: Yes and no. We have a story that goes along with our first album, but not for this upcoming album. We don’t really have an agreed upon philosophy, either. We just want to push ourselves to make some cool music we take pride in. 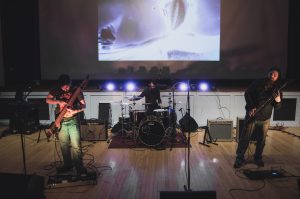 Crowdfunding almost $10K to make an album is an impressive testament to how much people enjoy your music!  What is the latest update with your album?

JG: Thanks!  Even after the turn of a few seasons it’s sometimes hard to believe that we managed to complete that campaign.  It’s certainly a very exciting and humbling experience.  I feel more compelled than ever to deliver the best album I’m capable of helping to make.

JTK: We were extremely fortunate to be on the receiving end of such a positive and enthusiastic response to the campaign. We’re in the final stages of production right now, and we’re looking forward to releasing the album in the spring.

JM: Indeed! We’re nearing the final stages of the album. We have one more mixing session to tighten up the last couple loose ends, and then it’s off to mastering. Unfortunately, the studio in which we recorded recently had a pipe burst so we had to delay our final mixing session until they finish cleaning up and get everything back together. We’ll update everybody officially once we know what our adjusted timeline is!

What is Geph working towards in 2018?

JG: We’re looking to release our upcoming album and a music video in the spring, as well as tour with our friends In The Presence of Wolves in March.  We’ve got a handful of festivals we’re looking to get into for the summer as well.

JM: Releasing this album, touring, releasing a music video, playing shows, hopefully getting on a few more festivals, and getting ourselves out and known beyond the New England region.

Geph has shows confirmed for March 2nd in Baltimore, MD and March 8th in Akron, OH.  Stay tuned to their Facebook page for venue info and more tour dates!