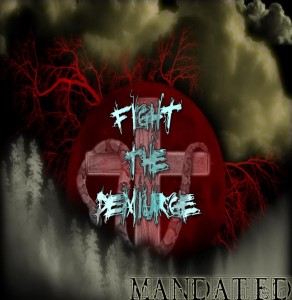 This isn't the right album cover... That's why they pay us the big bucks.

If you are in the mood for sick slices of homemade death metal, look no farther than this split EP, which features two one-person bands that both play brutal death metal. It will make you ask, “What type of sick people come up with this sort of thing?”

To answer that question, people I know on Facebook. Fight The Demiurge is the project of one Samantha Michelle Smith, who also does depressingly crushing funeral doom in Broken Anatomy.  In this project, she unleashes a torrent of thick distorted rhythms and guttural vocals. She has quite the frightening tone in her voice. That is totally meant as a compliment.

The split opens in almost funeral doom fashion with a creepy atmospheric intro before the next track, “Face The Reality,” slams right into you with the aforementioned sick guitar tone and even sicker vocals. From there, she throws in a couple more tunes, both that feature “so-wrong-that-they’re-right” dialog samples (one is from “Futurama”) and more crazy death metal antics.

So onto the second band.

How do you torture a whore?

I would say, by politely refusing her advances. (If she wants sex, then don’t give it to her.)

You know who you are.