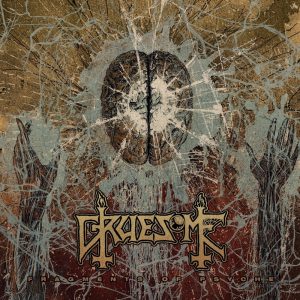 12/13/2001, the day the metal died.  “Evil Chuck” Schuldiner passed away after a battle with brain cancer at the age of 34, depriving the world of his uniquely talented musical mind.  Enter Gruesome, circa 2015.  Formed by metal luminaries Matt Harvey [Exhumed, Dekapitator], Robin Mazen [Derketa], Gus Rios [Malevolent Creation, Evil Amidst], and Daniel Gonzalez [Possessed, Exhumed] Gruesome has become as close to Death as one can get without re-animating Schuldiner’s corpse [although I’m sure a song has been written about just that].

Gruesome isn’t a tribute band in the literal sense, playing songs from the Death catalog under a moniker cribbed directly from the Scream Bloody Gore track listing.  Instead, Harvey and company have noted the intricacies of Schuldiner’s writing and arrangement, what made Death the genre-defining band it was, and applied them to new batches of aural chaos.  Through a debut full-length, Savage Lands, and the subsequent Dimensions Of Horror EP, Gruesome channels Death’s impressive technical chops and twisted,  serpentine song structures.

Fragments of Psyche is Gruesome’s latest platter of splatter and contains the newly-recorded title track, a Leprosy­­-era Death cover [“Choke On It ‘91”], and demo versions of five songs previously released on the band’s debut offering, Savage Lands.   At first glance it would be easy to dismiss the album as a stop-gap item to keep fans rabid until the next full-length or to fulfill a recording contract.  Gruesome wouldn’t be the first band to grab some old digital footage, pick a favorite band to rehash, and write a new song over tequila and beers in an afternoon just to get product to market.  Luckily for us, Fragments offers much more.  The title track hears the band morphing along the Death lineage.  Whereas the first two albums took their sonic ancestry from early Death, think Scream Bloody Gore and the aforementioned Leprosy, this release shows the maturity and arrangement upgrade first heard on Human and continuing through Individual Thought Patterns and Symbolic.  The cover choice, although predictable, is an absolute ripper with the band injecting new life into Chuck’s riffs.

Although a great listen, the previous two tracks take a backseat to the centerpiece of the EP: demo versions of “Closed Casket,” “Gangrene,” “Gruesome,” “Psychic Twin,” and “Savage Land.”  What makes the demos essential listening is a delightfully raw mix.  Whereas the album versions had a certain amount of fullness and polish Fragments forgoes any studio touch-ups.  This is a snarling, feral animal compared to its semi-domesticated forbearers.  Guitars grind, bass clanks, and drums pound with frenetic energy.  It is very easy to understand why the band felt like these sermons of aggression should be released on a world clamoring for another Death-inspired release.

Catch Gruesome on tour with Obituary at the Webster Theater on May 20th, 2017 as part of Hartford Death Fest.