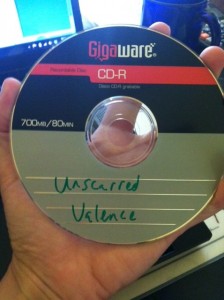 You never know what you’ll find in ol’ inbox.  Recently we received review inquiries from French thrashers Unscarred and New York instrumental prog band Valence.  It took me awhile to get the downloaded tracks into Alternative Control’s Music Review Machine, er, my car’s CD player — but at long last I’ve listened to both bands’ EPs enough to have something intelligent to say about them.

This band pummels the listener with straight-ahead thrash riffs and powerful clean vocals in the style of Rob Halford or Debbie Seymour (frontwoman of local metal band Vengeance).  The opening track, “100 Lashes,” typifies Unscarred’s songwriting approach: fast, chugging verses and harmonized guitar licks that contrast with anthemic, head-banging choruses.  My qualm with the EP is that the other four songs stuck to this structure a little too closely, with the songs blending into one another as I sped down the highway to and from work.  Is Unscarred breaking the mold with Fake Democracy?  No.  But if I saw them at Cherry Street, would I be impressed?  Yes.

These Westchester County rockers would give Peter Progger a serious hard-on.  Their three-song EP is centered on the idea of a mad scientist who constructs a laser that “rip(s) a hole through space and time, transporting the scientist to a future where his technology is a tool of oppression.  Now he may be the only one that can stop it…”  Of course he is.  And of course, the album opens and closes with laser noises, which I loved.

In between the campy sound effects, Laser Baron takes the listener on an ever-changing (or is it?!) instrumental journey.   Just when a song gets really far off into space, a cleverly woven melodic theme brings listeners back to the mother ship.  As someone who rarely listens to instrumental music and almost always dislikes prog, Valence won me over.

You won’t be seeing Unscarred live anytime soon unless you’re taking a trip to France — but Valence has several shows coming up in our area: