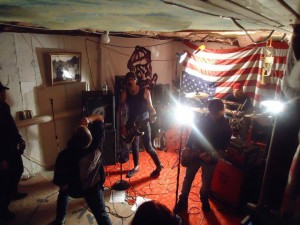 The people have spoken, and they want to hear about New Britain punks Cry Havoc!  These guys have been tearing it up since mid-2006, opening for old-schoolers like DRI and Leftover Crack, as well as contributing to Connecticut’s thriving punk scene.  (Maybe Stamford’s metal crowd could take some cues…)  Alternative Control talked with lead singer Jonny Disaster last week to find out what makes Cry Havoc tick.

Alternative Control: Can you tell me some highlights from almost seven years as a band?

Jonny Disaster: Yes, sir!  Almost seven years, it’s been crazy busy and a lot of fun.  Cry Havoc is myself on vox, Jesse on guitar, Snyderock on drums, and Skot on bass. We were all friends before we started this band, so not only do I get to play shows and record music that I love, but I get to do it with four of my best friends.  Can’t really ask for more than that!  I think that has a bit to do with our longevity.  A lot of bands in the punk/hardcore scene don’t really last that long, which really fucking sucks since some of them are really fucking good!

Some of our highlights would be playing with bands like The Casualties, DRI, Leftover Crack, Against All Authority […] and tons of great DIY bands.  Recording is also a fucking blast.  Jesse was the only one out of all of us who’d been into a studio before, so recording music was a new thing for the other three of us.  […]

AC: To what degree does personal experience influence your lyrics, especially in songs like “College Means Combat” and “The Party’s Over”?  (My brother is a former Marine who went to college on the GI bill… So now he has a free master’s degree, but he probably had to kill some Iraqis to get it…)

Anyways, as far as “College…” goes, I have no issue with people who join the military to defend our nation or for whatever reason they choose to.  One of my best friends has actually just joined the service.  The song wasn’t written to disrespect or insult members of the military in any way.  I just feel that to a degree, they lure in disaffected or dejected youth into the military with a lot of big talk and promises about money and education.  I mean, if people use that to their advantage to better their lives, then good for them!  That’s great, I just don’t think that (the military) should be the only option or opportunity for kids from the shittiest parts of our cities to get a college education.  […]  I know that’s a broad statement, but I tend to make a lot of those, haha…

As far as a song like “Party’s Over,” yea, I mean, you get to that point when you’re in your late twenties or early thirties and people are like, “Okay, when are you gonna grow out of this whole punk thing?  Y’know, quit playing in a little band and get a real job, act like an adult, stop spending your money on records, stop staying up late…”  All that shit.  […]  So yes, a great deal of personal experience goes into the lyrics I write.  I mean, “Nothing Will Ever Change” is about my struggle with sobriety from alcohol, as is “Catch Me in the End.”

AC: A lot of DIY musicians disagree on the best way to release music to fans — via download, CD, vinyl, even cassette.  How do you guys release your music, and what are your thoughts how downloading has changed the listeners’ experience?

JD: Good question!  We’ve released all three of our albums on CD.  We find it to be the most common of formats for people.  We’ve wanted to do some stuff on vinyl and are hoping to in the near future.  The biggest thing with that was the concern that not everyone has a turntable.  But since the increase of included download cards, it’s definitely possible.

I think downloading is a very slippery slope.  One side of me thinks that it’s a really cool thing.  It’s really awesome that bands can just put their stuff out there and just fucking give it away.  I mean, how fucking DIY and punk rock is that?!

The thing I find, though, is that for me speaking personally, I need a physical CD.  I don’t have a cell phone, I don’t have an MP3 player or an iPod… I have CDs and records.  Even burned CDs are iffy for me.  I like to have a legit physical copy in my hand – something that has lyrics and artwork and album credits in it, something that I can look at when I listen to it at home.  […]  I think that when it’s just a long list on a screen, it becomes a little less personal, like it becomes less meaningful and more disposable… I know I’m weird when it comes to that stuff, I mean there’s no doubt that digital music is the future – but it doesn’t mean I have to fucking like it!  Ha! 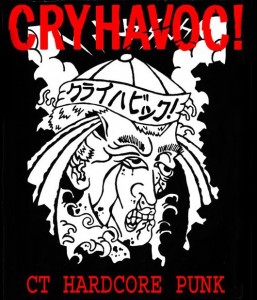 AC: What are your thoughts on the Connecticut punk scene?  What’s good about it, and has it changed during Cry Havoc’s time as a band?

JD: The Connecticut scene is great!  We’ve been very lucky to make the friends in CT that we have, whether it’s in New London, Wallingford, New Haven, Danbury, Torrington, Hartford, or anywhere else.  The biggest think we’ve seen change are the new faces that we see coming out to shows.  The scene is getting strong again!  I think that everyone has just gotten so sick of the bullshit that’s on the TV and radio, realizing that there is a thriving scene right in their backyards.

I feel punk has been where it started, the underground.  Not dead, but in the underground.  I think that the kids will keep coming out ‘cuz I don’t see the pop culture not fucking sucking ass any time soon.  Another big change we’ve seen in our time is the amount of bands that come and go.  I mean, the only other bands that are still playing from when we started are Sadplant and These Furious Days.  Everyone else has broken up.  Now granted, some of those bands broke up and started other bands that are fucking great – like Copyright Chaos broke up and from that we got two amazing bands, Drug Shock and Absum.  Stressbomb broke up and we got Dead City Riot.

AC: What other Connecticut bands would you recommend to our readers?

JD: Make sure you check out Forced Reality, Sadplant, M-13, Drug Shock, Damn Broads, Absum, Dead City Riots, Progress, Two Fisted Law, Blasmat, Bad Lieutenants, The Hulls, God’s Middle Finger, Empty Vessels, Pickpocket, Westside Infection, The Lost Riots, The Provokers, The Abductors, Heavy Breath, The Hempsteadys, LA Trash, When Waters Rise, The Dipshits… There’s a ton of great bands out there, and the only way you’ll find out about them is to come out to some shows!  Remember, YOU are the scene.  Thanks for listening.

Check out Cry Havoc on Facebook, Twitter, and ReverbNation… Or even better, at one of their upcoming shows!