I think we’re playing Connecticut next week at some casino…. They just offered it to us like four days ago — they had a wheelbarrow full of money and they were like, “Please play our casino.” 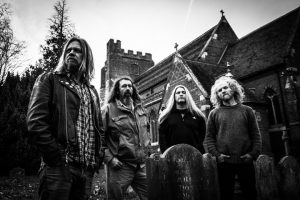 On keeping a band going for close to forty years —

Well… I mean, it’s been trying at a lot of times.  Being in a band is like being married to three, four, five fucking people — and y’know when you mix creativity and art and money together, things can get ugly.  But I’ve known Woody since fifth grade.  And Mike Dean and I, we pretty much grew up together.  We understand each other’s idiosyncratic natures.

Right now, Woody’s on a different side of politics than I am… Y’know, we’re just doing it for the music.  I think in the past, COC was much more of an outspoken political band, which I really liked — but the guys, they don’t necessarily want to have politics be part of it.

The upcoming album, musically and lyrically —

Pepper does a good job of talking about different subjects but being a little more ambiguous, as opposed to going, “This is that, this sucks, this makes me angry.”  He’s a lot more artistic about the way he talks about political issues or personal issues.  He hides it well, he makes it interesting.  […]

There’s a lot of good ear candy on this new record.  Frankly I was a little worried about it at first, because the idea was when we were recording the album, which we started in October, (was) to demo it at our practice space.  We were gonna demo a shitload of songs and then take them to someplace and record the basic tracks.  I guess it was in March that Pepper and Woody started saying, “Let’s keep what we got, our demos.”  And I was like “What the fuck are you talking about, I didn’t even change drum heads for this!”

So I was a little freaked out…. But we ended up (finishing) the album at the studio — we used a hot shot mixer guy that we used for the Wiseblood record, Mike Frasier, and man he mixed the fuck out of it.  In some of those, I only played the song twice, like EVER — so you can understand my consternation.  “I can play that better” — “Nah, nah, it sounds good.”

“So maybe a little more raw…”

There are a lot of different musical flavors in there.  I think southern-wise, Pepper’s voice just sounds a little southern anyways, which I like.  […]  Cuz I wrote that song “Albatross,” and I was supposed to sing it — but it sounded way better with him singing it.  As far as the southern influence, we still like, since we were kids, bands like ZZ Top, Thin Lizzy (I guess they’re not southern), Allman brothers….  Pepper’s vocals, just the way he sounds, the cadence he has in his words and stuff like that… I think you’ll like it!  If you liked Deliverance, you’ll like this.

“Deliverance is my favorite COC album.”

Oh it is?  I have three favorites: Deliverance, the album we did before Deliverance called Blind (we had a different singer), and then the album we did in the mid 80s called Animosity which was more of a hardcore punk album.  So it’s like three different bands almost!  It’s like saying which one is your favorite child…

I was married, with dogs.  For about a New York minute, I was thinking about maybe having kids.  We were married for a long time — her name’s Ashley, she’s from North Carolina — that was during the brief respite of time where I wasn’t playing in COC.  I was working for my folks full-time….

By the way, if my folks hadn’t helped us out the way they did, I don’t think we would have done half as good.  They bought us our first van, they let me book all our tours from their office… They had a fax machine, which in 1983 that was a big deal!  We did a show with Slayer and the Obsessed in Baltimore, MD in 1984, and we’d already known Slayer from playing with them on the West Coast, the Left Coast — so we were friends of theirs and this was the first tour of the whole United States.  They were cruising around in a U-Haul truck and Trans-Am — Haunting the Chapel tour.

We showed up in Baltimore and we’d already played Baltimore a million times, we had a good fan base, crazy punk rock kids…. Place was packed.  And this is before we knew the Obsessed — we’re friends with Wino now, but back then we didn’t know him at all.  So Wino says, “I’m not gonna open up for any punk rock band, Obsessed’s been around for blah blah blah, fuck them guys.”  And we were like, whatever, we don’t care, the place is packed, if it means that much to you, we’ll go on before you.”  Anyway, it made Slayer mad as hell.  They were like, “I don’t know who the fuck those guys think […] You’re our friends, fuck those guys!”

We were like, “No no no, it’s gonna be a killer show, just leave them be.”  So we play, and like I said it was packed.  You know those old popcorn poppers at the movie theater?  That’s what it was like, people stage-diving everywhere.  Set was killer.  I’m loading my drums off the stage and Obsessed was trying to put their stuff on the stage, and all of a sudden I see Slayer and their road crew stopping The Obsessed from getting on stage.  And I think it was Kerry King or Hanneman that said, “You’re not opening for a punk rock band, but you’re playing after us.”

Poor Obsessed, they had to play for like nine people…  From nine hundred to nine.

But anyway, getting back to how my parents helped out, they had a fax machine.  So we’re hanging out with the Slayer dudes after the show, and they’re like, “We know you did your first record DIY,” and we’re like, “We need a label.”  So Araya or Lombardo, I forgot who it was, says, “We’re gonna get you signed.  We’re gonna get our record label guy to sign you guys.”  We thought they were just being nice…  Sure enough, that Monday when I got back from that little weekend tour, there was a contract in that fax machine from Metal Blade Records.

I’ve been doing since I was sixteen, and I love it.  What a great job, you get paid to go all over the country and the world and meet new folks.  It’s a total blessing to be able to do this.  But Woody and Pepper both have children, so it’s kinda a drag.  My ex-wife took the dogs, I have visitation.  (laughs)  We’re still cool, though, we still talk about every day.

We’re doing this and then we’re playing the casino next week, and then we do a week or two with Danzig, kinda Northeast, kinda Midwest.  We’re all friends with Glenn from the real ol’ days so whenever we tour with him, he treats us real good.  And then between you and me because I don’t think it’s been announced yet….

[You’ll have to keep an eye on their website.]

The songwriting process with the current lineup —

It’s the same as it’s been for a long time.  Essentially it starts with riffs and the accumulation of riffs, and you get your basic intro, verse, chorus, whatever.  It’s more riff-oriented rock n roll, heavy stuff, than campfire chords.  […]  Mike Dean or myself write the lyrics for it, like I wrote the lyrics for “Albatross.”  Writing the music part is almost always the same.  I try to write the melody and the lyrics earlier on in the game.  It works, we’ve been doing it for a long time… And it’s still fun!

A North Carolina native on the Confederate monument debate —

I mean, uh, those monuments don’t bother me but I know a lot of people it bothers, and I know it symbolizes something evil, chock full of hatred to a lot of people.  And growing up in the South and seeing Klan rallies when we were little kids… The Klan and the Nazis talk about “heritage not hate,” but that whole history is based on slavery.  But they won’t ever accept it.

Right after Trump said whatever bullshit he said that day [following the white nationalist rallies and domestic terror attack in Charlottesville, VA on August 11th and 12th] — “There’s a lot of good people in those…” — people gathered in Durham where Duke University is, it’s predominantly African-American.  Anyway, some young girl, maybe in her twenties, climbed up on a Confederate statue, got a noose around it, and a whole gang of them pulled it down themselves!  [laughs]  That’s bad as hell!  So of course, she got thrown in jail.

A lot of people don’t know that these statues were put up in the 20s when there was a big revival of the Klan.  The Klan had a big group assembly I think at Madison Square Garden in the early 30s — that’s how big they were.  So a lot of the statues came in then…. I mean, I don’t know.  They don’t bother me, but I could see how they would bother a lot of people.

…And that serious note was where we closed our interview.  While the band may not want politics to be a part of their music, they’re writing music against a backdrop of uncertain times for our country; I’m curious to see if and how this current unrest will be reflected.  COC performed that evening at The Joint to a packed house.  Stay tuned to their website and Facebook page for news on tour dates and the upcoming album.

See Corrosion of Conformity on the fall shows they have announced thus far:

Editor’s Note: Reed is correct about the statues and Klan rally — see “American Hate, A History” published August 17th, 2017 in Time.  Thanks to Thomas Pizzola for his input on interview questions, and to Earsplit PR.