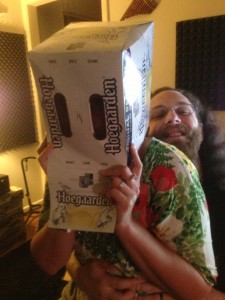 "Who's that talking shit about the scene?" "Some chick wearing a beer box on her head -- definitely not Jessie May."

So, I haven’t written a real article in over a month.  I blame the new job, the Shoutbacks, Obamacare, my cats…

But this morning, I’m putting the excuses to rest and writing a stream-of-consciousness music column.  Transitions be damned!

And these: Danny Evans‘ “Fuego” and “Zero Gravity,” filmed by Tunnel Vision Co. of Norwalk.

Did you enjoy the little boy, the boat rides, and the party bear?  Now go back and actually watch the videos so you know what I’m talking about.  Then share them with your friends so you look like you’re on top of shit – The Hipster King would approve.

(Insert transition here.)  Been listening to some new music lately.  Mr. and Mrs. Hipster King burned me a couple The Sword CDs that have been living in my car. (Insert another transition.) At a recent local show, one-man operation ORCumentary impressed me with his catchy songs, but simultaneously made me wish he had another couple orcs up there with him on guitar, bass, drums…  ORCumentary addresses all that in his recent interview with Bair, in case you’re wondering. 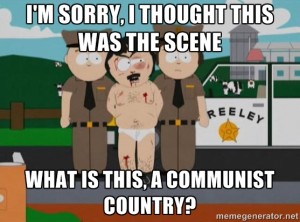 At the same show, I really enjoyed Lowkey from upstate New York.  These dudes brought it, whatever “it” is – and it didn’t hurt that one of them looked like a bizarro amalgamation of a couple dudes I think are hot.  Going back for a sober listen, the clean vocals aren’t perfect… But who cares?  Polish is nice, but it’s not always a requirement.  If I wanted polish, I’d listen to Symphony X. And to those of you who bust my stones for never saying anything negative about bands on this blog: there you go.  It happened.  Are you fucking happy now that I said a band did something not perfectly?  Can you share our Facebook page and talk about how awesome we are?

While we’re being negative: if you look like Piney from Sons of Anarchy, maybe you shouldn’t…  WAIT WAIT, JESSIE, THE SCENE!  PUT DOWN THE COFFEE, WE MUST LIKE EVERYTHING IN THE SCENE EVEN OLD MISOGYNISTIC….