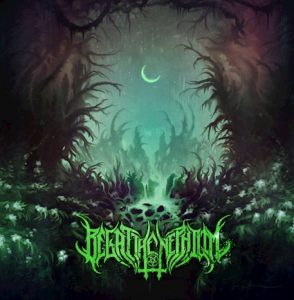 When I first saw New Hampshire’s Begat the Nephilim play at Cherry Street Station several years ago, I was struck by the contrast of their blistering performance and blithe stage presence.  Pretty sure one of them was wearing a skirt and fishnet stockings, although it may have been a Halloween show…  I later had the pleasure of hosting them at a Stamford show in 2015, where they made a lasting impression on a crowd who had mostly never seen them before.

Local readers will know that Connecticut guitarist TJ Gramolini joined the band for a time, but has since left on good terms.

And now the promo for their debut album Begat the Nephilim I: The Surreptitious Prophecy / Mother of the Blasphemy is making the rounds through media outlets, a work that is sure to solidify their mark on underground metal map.  The easiest musical comparison is The Black Dahlia Murder; melodic lines alternate with tremolo/blast riffs, and vocalist Tyler Smith sounds equally sinister in his highs and lows.  I wonder if the title of the second track, “Cardboard Casket,” is an intentional nod to BDM’s “Closed Casket Requiem.” 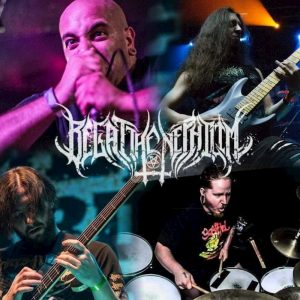 But Begat the Nephilim does more than pay tribute to their influences.  Surreptitious Prophecy is a concept album, weaving a tale of a heavenly being who wreaks havoc on mankind.  Plenty of the album is “crushing” — most overused metal blogger adjective ever — but there are also moments of calm before the storm with flowing piano and string interludes that open several songs.  Begat really stretches out on “Mobin,” showing their songwriting chops in this seven-minute journey.  And finally, the band keeps its sense of humor in rhythmic twists and harmonic shifts — as if to say, “Yeah we’re ‘crushing,’ but how ’bout dem fishnets?”

Surreptitious Prophecy will be released on June 15th 2018 via Unholy Anarchy Records.  Visit Begat the Nephilim’s Facebook page for upcoming shows — if they’re coming through your town, this is one band you don’t want to miss.

Promotional copy courtesy of Dewar PR.  All opinions are my own.