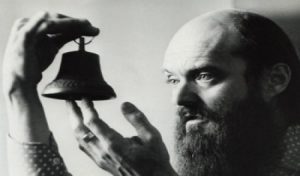 Sometimes the best music is the kind that transcends its composer. I’m not talking about some prog rocker’s ridiculous concept album about worshiping leaves, or some self-important indie rocker making the end of a relationship with his girlfriend into a pseudo-intellectual lecture on depression. I’m talking about musical notes that are written, organized and played by humans with modest human intentions to create an ode to something much greater than themselves.

There’s no preaching or teachings in the sounds that Estonian composer Arvo Pärt creates. It’s beautiful, ambient and minimalistic classical music that turns into something divine inside my head. I was raised as a Christian, but I can’t say I follow the Christian faith. I don’t identify with particular regulations and morals of the church. But if any of the fables told to me about angels, heaven and the messiah have any concrete existence, all the evidence exists in this man’s music. He makes me want to believe in heaven, and in the idea of supreme goodness.

Pärt sets out to create sacred music. But he doesn’t seem to throw any of himself into his art and risk diluting its anonymity. He composes from a Christian’s view, but his tribute to God feels altogether unknowable, humbling and satiating to the soul. I don’t know what any of his compositions are really about and I don’t care. The celestial, amorphous winds and white light that radiate from his works are a glimpse into absolutes. I’ve never heard absolute sorrow and absolute peace anywhere like I have in Arvo Pärt. It’s not about religion or scripture. It’s music that assures me that there’s something incredibly awesome, intangible, and mystical about being alive. I’m not privy to its secrets and patterns. But I’m lucky enough to witness a taste of its power. This is music that pulls me out of myself, makes me just an insignificant part of the universe. And I’m happy to disappear.

I’ve selected four pieces of music as an overview. I don’t think there’s much sense in attempting to describe each one separately. They all fit into the unnamable mold of sacred classical music. Or perhaps I’m not knowledgeable enough about classical music to adequately comment on the genre. All I can say is this is beautiful stuff. Much of his compositions consist of choir, orchestra, solo piano and violin. Movements experiment with minimalism, silence and dramatic variations in volume. It’s music made for gargantuan cathedrals, wintry mountain valleys and the Empyrean.

Merry Christmas and Happy Holidays, everyone!