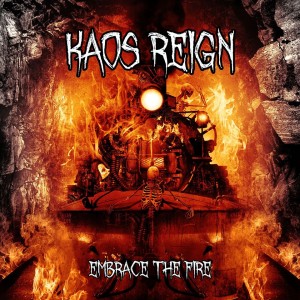 Looks like Bill Klopfer is at it again, with another release under his belt from one of his many ongoing projects. And what a treat to have Arcane Malevolence’s drummer Chris Anderson back in the swing of things. And Paul Low from Dyed in Grey?! Damn, we have a super-group in the works. And with every super-group comes high expectations. Do these three distinct metal personalities have what it takes to create something organic that’s both a worthy collaboration and a showcase of their individual strengths? Kaos Reign says yes, and they’ve said this with grit in their teeth. And that grit is all over their album Embrace the Fire.

Kaos Reign is a relatively new band, but their first LP Embrace the Fire presents a group that’s already found their niche in the local metal scene. Eleven tracks present the listener with an unapologetic fusion of old school death metal music and the trademark pit-bull bark vocals of Mr. Klopfer. Here we have Blessed Are the Sick as a point of reference, but then things get a whole lot more doomy, pummeling and groovy. Yes, groovy. There’s an almost Pentagram/Sabbath/Electric Wizard type of stoner groove to this album that sets it apart from other bands.  Yes, certain sections beat you senseless like most quality death metal does. But there’s a great deal of riffs here that represent a slow, primal, calculated evil. It’s a type of wickedness that doesn’t always depend on shocking your senses with blast-beats.

These riffs at their doomiest, creep up like a bad mushroom trip spent in a half-burnt down asylum. And then a little bit of something upbeat will pull you into an intoxicated state at a Satanist biker party. But no matter where you happen to find yourself when listening to this, everything is a red-orange hellscape. Sometimes I’m at a black magic ritual in a mountain forest at night, with blazing fires across the horizon. Other times I’m the ring leader of a prison riot, and the whole place is a casualty of my lethal Molotov cocktail.

The instrumentation on here is fantastic. Anderson practically pees all over these songs with his dizzying array of fills and drum gymnastics. But the dude knows how to hold down a groove when the moment calls. Bill, as always, provides the framework for these songs, pulling from his riff encyclopedia a carefully arranged sequence of some of his nastiest licks. Paul is mixed a bit low, but his flare comes through in droves at certain moments. And hell, whatever you may not be able to hear here you can surely check out for yourself at any of their upcoming shows. I saw them when they came down to Fiddler’s Green here in Stamford, and I was impressed by their tightness. Chris Anderson is always a fun drummer to watch. I may be biased, since he used to be a fellow bandmate. But seeing him spaz out on those blast-beats still makes me smile. Kaos Reign will make you metalhead savages smile too. Just watch those pearly whites in the pit.

Visit Kaos Reign on Facebook, Reverbnation, and CDBaby — and check our show listings to find out when they’re playing next!