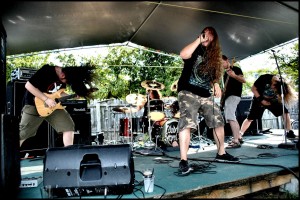 Under A Serpent Sun performing at Cherry Street Station.

It was my last day working at Senor Pancho’s. I was meeting a girl for a drink in between shifts, at a watering hole down the road, when I got a text from a member of the self-professed Gayest Band in Connecticut, Lightsbane: I could NOT MISS THE SHOW TONIGHT. Well, why? I CAN’T TELL YOU. Then I can’t go; I’m working. OKAY, YOU CAN’T TELL ANYONE. CHRIS AMOTT IS GOING TO BE THERE AND HE’S PLAYING BRIDGE OF DESTINY WITH US. Well, fuck me. On my last night at a job I was sad to leave, I dipped early, because my friends were going to play with a pioneer of melodic death metal. A founding member of Arch Enemy was going to play an Arch Enemy song with one of my favorite local bands. The events of that evening did not unfold as expected, but we all know (and if you don’t know, now you know…) that Matt Hallquist, whose band Under A Serpent Sun also played that night at Cook’s Café, is now the frontman for Chris Amott’s recently-revived project Armageddon. Whoa.

Under A Serpent Sun was first brought to my attention by Lightsbane, in a queer coincidence. The guys told me about a gang of really young local musicians who were truly unruly in tearing the roofs off of venues. I finally caught them at a show and understood. Clocking in at 20, 21, 22, and 28 years of age, they are younger than the average Bair, and the average metalhead to boot. But they have a rare appreciation for the music that has come before, and a firm grasp on today’s sound. 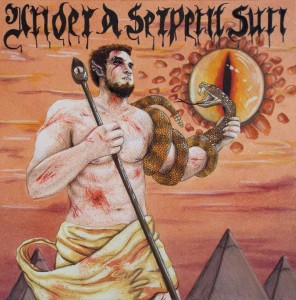 Their most recent EP, cunningly entitled EP, is a tribute to the precedent, as well as a glimpse into the future. With nods to classic melodic components that date as far back as early Iron Maiden, UASS also surges forward by employing progressive elements that defy the typical prog-minded composer with their subtlety. It’s not rocket science; it’s space-faring adventure. All the fun of Shark Week, without the tedium of earning a master’s in Marine Biology. This is evidenced as they employ piano interludes, which separate crushingly brutal verses, leading to catchy, triumphant chorus riffage. The song “One” off of EP is a prime example. What’s most impressive is that it all coexists swimmingly, winding naturally between all aspects of the band’s expansive well of influence during the course of each song’s journey. 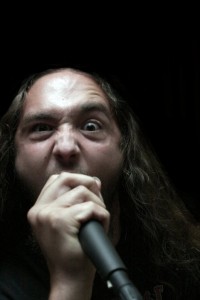 "Show me your OOOOOOO face."

Also impressive is that Matt Hallquist not only performs several unique vocal styles, all aggressive but ranging from low, guttural growling to shrill, eardrum-rending screams, but he also writes all of the compositions. When Under A Serpent Sun took the stage at Festival of the Dead this past summer, they did so without Hallquist. I asked what the guys were going to do, assuming that his duties for Armageddon were the reason for his absence. And also, because any vocalist that isn’t already obliged would be outright insane to not want to work with these guys, if the role was suddenly vacant. They revealed to me then that without Matt, there is no Under A Serpent Sun. When I talked to Hallquist for this story, he confirmed it. “I love Under A Serpent sun, and I always will. I’m actually the main contributor for the band, both with the guitar work and the lyrical content. The other band members all take the parts that I write and add their own unique flavor, which is a wonderful process.”

Guitarists Dylan Heim and Anthony Buck, bassist Sean Reid, and drummer Kyle Tallerdy are not only beyond adept with their instruments, but they excel in bringing Hallquist’s vision to life, and there is no doubt that each of them brings something invaluable to the overall sound. When I asked the frontman if there have been any lineup changes, he told me “We’ve had a few bassists over the years, which didn’t really change our sound until we met with our current bassist, Sean. He has very broad and diverse influences, which have helped us to become more progressive over time. We also added a second guitarist a year or two after the band’s inception. That certainly helped us to achieve the harmonies necessary for the melodic death metal sound that we strive for.” Their success as a group goes beyond the recent release of EP; they’ve played high-profile festivals like Desolation Fest (featuring Suffocation and Exhumed), Worcester Death Fest (featuring Six Feet Under and Dying Fetus), and El ‘N Gee’s swansong Winter is Coming Festival (featuring Vital Remains).

My curiosity got the better of me while discussing Under A Serpent Sun, and I was able to pry the scoop from a humble and reserved Hallquist regarding his membership in Armageddon, and how that came to pass. He was kind enough to detail the experience for me: 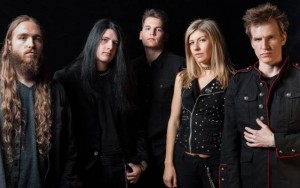 Armageddon, with Hallquist at left.

“Back last fall, around mid-September, I was contacted by Joey Concepcion [Outstanding Connecticut guitarist, of award-winning local project Dead By Wednesday – Bair]. He was asking me if I knew any vocalists that would be interested in joining a new project. I asked him what the style of music was going to be, and he said it would be along the lines of Arch Enemy-influenced melodeath, which certainly piqued my interest. I told him that I would love to be a part of the project, and at that point he stopped beating around the bush and told me that Amott was going to be in the band. Joey had seen Under A Serpent Sun play a set at Cherry St. about a year before that, which was the first time we met. That’s what led him to contact me, so I feel very lucky that he happened to be there that night. I met up with the band down in Milford to play a couple songs I had received two days before, and everything went great. Chris asked me if I’d like to join the project, and it’s been a fantastic experience so far.”

According to Wikipedia, Armageddon has been Chris Amott’s solo project since 1997, boasting former contributors from bands like Meshuggah, Nevermore, In Flames, and God Forbid. Matt Hallquist finds himself in great company, and anyone who questioned Connecticut’s fertile and vibrant metal scene needs only look as far as Sweden, in the sense that two of our homegrown talents are currently performing with an innovator of today’s melodic death metal. The first Armageddon album featuring Concepcion and Hallquist will be called Captivity & Devourment. It will be released this year, and unlike most other Armageddon records over the years, it will be released here in the states.

Under A Serpent Sun isn’t going anywhere anytime soon, despite what promises to be a huge re-debut for that other project. The band is currently working on what they plan to be a concept album, which they hope to record this year. The aforementioned song “One” is actually a prequel to this concept, lyrically and stylistically, and offers a glimpse into what we can look forward to from UASS’s next effort. To experience the sheer brutality live, your next opportunity will be Saturday, August 16th, at the venerable Cook’s Café in Naugatuck. And give Under A Serpent Sun a like on facebook to make sure you can find out when they’ll be demolishing venues in the future. 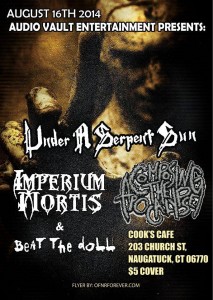