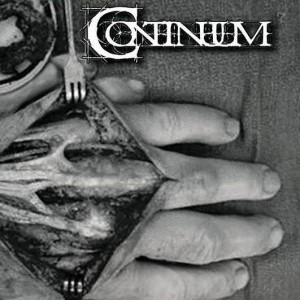 This is my first opportunity to grill a single band’s consecutive recording efforts; I dread the insinuation of collusion or a conflict of interests, as my journalistic integrity is tantamount to continued good faith with my readers. That said, it cannot be denied that in the time since I grilled their previous release, Rise & Fall, I have become better acquainted with the members of Continuum as both musicians and people. In spite of that eventuality, I’m here to firmly and coherently state that 7 is a superior offering, and a worthwhile gift for any metalhead this holiday season.

I sincerely enjoyed the material on the prior recording Rise & Fall, and I have seen Continuum countless times since its release. Their stage presence is big to the point of overwhelming, in the most complimentary way possible. Tony Mica, on bass, storms the entire room, at times leaning heavily on his bandmates and at others confronting the bravest concert-goers at the foot of the stage. Guitarist Jason Niezgorski shreds with rare precision and enacts the reserved and poised role, while fellow axeman Bryan Reilly bookends the portrait with his eyes rolled into the back of his head, radiating rage and coaxing shrieking fury from his instrument. I quote a wise man (myself) by understating: “Darrin Yardley is a beast.” Truly one of Connecticut’s treasures behind a drumkit, he boldly stands out in a CT Scene that boasts a handful of incomparable talents. And the centerpiece of this macabre and tormented artwork, the focal point of the ruination, vocalist Brenda St. Amant dances daintily while batting her eyelashes and roaring top-notch guttural vocals, while at times headbanging with abandon and emanating haunting melodies in a crisp, clear, clean tone. Chaos is a word I’ve often used to accurately describe their stage show, and it is the best, most controlled kind.

The aforementioned Rise & Fall, however, failed to capture their essence. It showcased their talents and the compositions were beyond enjoyable, but the new release 7 does a much better job of encapsulating the madness inside of a studio. The songs “Rise & Fall,” “Bleed Us Dry,” and “Dead to Me” are revisited and renewed on the more recent release, finding a more comfortable home in the fuller sound and higher quality recording.

Brand new songs are what this album is all about. Having the experience I detailed earlier, in following the band’s growth between albums, I’ve actually enjoyed the new material live before hearing it immortalized on disc. For instance, I never knew the name of the opening number “Kiss the Pavement” but I was humming along when I popped in the CD. It opens with a signature riff, passed back and forth between guitars, joined by a looming, droning bass resonation and some drum fills, before launching full-on into what will be one of the premier albums closing out the calendar year 2014. The second track, “Chokehold”, exudes brutality, and challenges the listener not to headbang. One thing I feared was that a song as eerie and lamenting as their older tune “Embers” might not find a place on this record, but I was pleasantly surprised by “Apathetic.” It features St. Amant’s cleaner tone in chilling harmonies during extended segments, while still packing the punch of aggressive, ferocious moments.

The track that has the most invested in it is, by far, “Left to Leper.” The band embarked on a monumental production to create a video worthy of their newly-minted disc, and succeeded. This fitting accompaniment depicts a war-torn region through the eyes of a child. Without needing a spoiler alert, the band fits into the setting well and a story emerges with intrigue, empathy, and in the end a proper resolution (Darrin Yardley is a SUPER SPY?!? …kinda saw it coming).