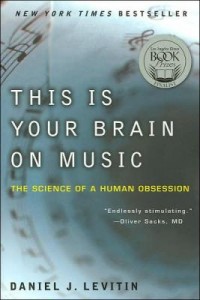 It’s no secret that I’m a music fan. But as much of an avid listener as I am, it’s almost embarrassing how little I know about the fundamentals of musical structure. Every review I write focuses on listening at an emotional and cerebral level, because that’s how I built up such a favorable relationship with it. Music was an escape – a form of expression above and beyond language that was able to speak to my emotions in ways no words could. But I also review the way that I do because I don’t know enough about the physical components of music to have an opinion. People I personally know would be all over my ass about my bumbling attempt to explain an arpeggio or a C major chord properly. So I felt like I needed to do some research to expand my writing arsenal. Neuroscientist and music nut Daniel J. Levitin’s book This Is Your Brain On Music seemed like a worthy source of music theory 101 for the average intellect. But it ended up being about so much more than that.

What Daniel manages to do is explain in an easy-to-read fashion the science behind our obsession with music. For the first chapter or so, he grazes on the subject of music theory, explaining the basics to people that don’t happen to be musicians like myself. He runs through the components of what makes a musical piece: pitch, rhythm, melody, timbre, reverberation and so on. He even runs through a couple of the most popular musical scales of Western tradition. This is all to create a basis of understanding for the rest of the book’s headier chapters.

Being a neuroscientist, Daniel has done rigorous studies in how and where music is processed in the brain. He deconstructs the entire listening process to give us step by step insight into how music works through lectures on molecular vibration, inner ear components and the complicated nerve cell interaction in multiple sectors of our brains that make music what it is, and what it means. He explains the science behind how our emotions are manipulated by music through subconscious anticipation of what the next note in a musical piece will be, and how a mixture of satisfaction and violation in that next note can either disgust us or move us depending on that satisfaction/violation ratio. It’s all rather fascinating, and you don’t need to be a neuroscientist to follow along.

Beyond that, Daniel answers some of music’s pressing questions. He explains the objectiveness of musical taste, and how people take to particular musical genres due to upbringing and cultural differences. He theorizes on why certain musicians rise to prominence while other equally talented musicians don’t. He addresses the reasoning behind why some people take to musical training better than others, and discusses the concept of being a naturally “gifted” musician. He even answers why certain songs get stuck in our heads! Spoiler Alert: Earworms.

Daniel has written a science book that’s not only easy to understand and chock full of information, but also inspiring. Upon finishing the book, I played an album on my iPod that I hadn’t heard before, keeping in mind all that he had taught me about music listening. It happened to be Iamthemorning’s Lighthouse, which I reviewed here at Alternative Control. It’s likely to be one of my favorite albums of the year. This is undoubtedly due to the music itself, but I’d like to think Daniel had a hand in this as well. I listened to this record with a deeper understanding of why I find music so moving. And because of this book, I feel like I’ve finally communicated with a part of my brain that was always there, but never understood.