Scanning the press release for Stygian Crown’s upcoming, self-titled release, a phrase jumped off my screen: “Candlethrower.”  For the uninitiated, it might seem like an ill-placed promo for the newest Olympic sport.  For the extreme metal fan it immediately brings two bands into play: Candlemass and Bolt Thrower.  Both outfits constitute giants in their respective genres and, as such, bring with them Mandingo-sized expectations.  I also wondered in what ratio those influences might be dredged – would these LA-based hessians hit us with slow, plodding doom underneath sinister death metal growls or employ clean, operatic vocals on a bed of lead-thick brutality. 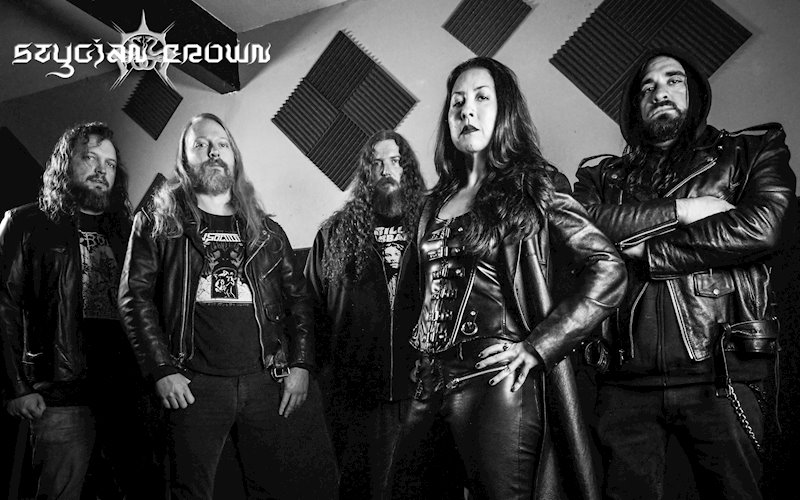 Our answer comes quickly as “Devour the Dead” kicks in with thunderous drums around a down-tuned, distorted guitar groove.  Singer Melissa Pinion hits the sonic broth with her crystal clear, Messiah-approved vocal style.  She swoops and soars on these songs, moving in and around the filthy chord progressions.  Guitarists Nelson Tomas Miranda and Andy Hicks strike a nice balance of grind and melody, their guitars pushing the songs forward.  Jason Thomas’ bass is covered in rusty nails, providing adequate low end needed for proper death and doom.  Rhett Davis, of Gravehill and Morgion, powers the sonic menagerie with his right foot, kicking a hole in the known world.

As the record progresses through eight tracks the scales tip toward the “Candle-” side of the scale.  Yes, the guitar work has a death metal aesthetic but coupled with the drums and the overall pace of the songs – this is a doom record.  The shortest track, the aforementioned “Devour the Dead,” checks in at a hefty six and a half minutes with the other bookend, “Through Divine Rite,” floating across eight plus minutes.

All in all, Stygian Crown is a solid listen and absolutely shows the potential of the band moving forward.  As a fan of both death and doom metal I would love to see a more even blend of the two styles but if you are looking for something a little different than what we have heard in the past, check it out.  The album drops on June 26th, via Cruz Del Sur Music.