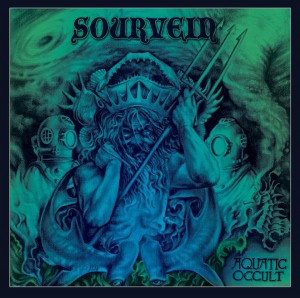 It’s been a long, slow slog to get to this point, but T-Roy, the creative force behind Sourvein, has shown no let-up in his dedication to his craft. On Aquatic Occult, the band’s new album released this past week on Metal Blade, he offers a master class on the art of doom.

In fact, the move to a bigger label, means T-Roy has stepped up the plate and offered one of the band’s finest albums to date. Mike Dean, bassist for COC, sat in the producer’s chair for this one and gives the album the right amount of grit and heft.  His partner in crime, Reed Mullin, provides drums for a majority of the tracks on his release.

Album opener “Tempest (Of Desire)” sets a somber tone which leads right into the first proper track in “Avian Dawn.”  “Avian Dawn” is blues tinged doom of the highest order, filled with muscle and groove. In fact many of the songs on this disc have a fine head bopping groove to them. Plus, there also traces of the blues in many of the songs, which is understandable because the band comes from the South.

“Ocypuss” follows next and ups the aggression through the guest vocals of Randy Blythe, from Lamb Of God, who is a longtime Sourvein supporter.  “Urchins” aims for a more aggressive path, too, and features harsher vocals from T-Roy. “Bermuda Sundown” features martial drums and submerged vocals to go along with the riffs. “Oceanic Procession” ends the album on a very somber note.

Hopefully with Sourvein being on a larger label, more people will get a chance to hear this album. It’s some of the best downtrodden, bluesy doom going.