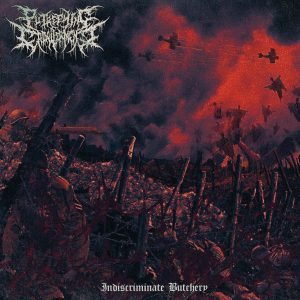 Putrefying Cadaverment’s new album is called Indiscriminate Butchery,  and it will definitely bludgeon your ears with indiscriminate blast beats. Imagine a band on par with Mortician’s level of brutality, transported to gore-splattered trenches of World War I, and it is the best description I can sum up for these maniacs from North Carolina. It’s not a perfect comparison, but one thing is for damn sure, this is a savagely polarizing death metal album likely to scare away all but the hardest of war metal and slam freaks. Though these guys have been around since 2007 and have released a few demos and one EP, this is their first full length album following a lengthy hiatus.

Indiscriminate Butchery, released on 4/14/19 via Sevared Records, clocks in at just 27 minutes with 11 blitzkrieg-paced songs. Perhaps “war grind” is the best subgenre to summarize Putrefying Cadaverment’s aural assault, coupled with its art work and horrific subject matter. Songs like “Forced Bayonet Entry” and “Mass Grave Sewer Line” are certain to make my grandmother wax poetic about the good ol’ days. Musically, this a mostly relentless string of blast beats and double bass rolls, but it occasionally gives way to Suffocation and Dying Fetus-style breakdowns.

This album explodes kicks off with the wonderfully descriptive “Forced Bayonet Entry.”  Vocalist and bass player Justin Volus delivers extremely harsh bellows and shrill squeals for the entirety of the album. I’m curious to see how he handles the vocal duties with having his hands occupied on the bass live. I’m also curious to understand what he’s saying with such thoughtfully visceral song titles. Unfortunately, that’s not the case with Putrefying Cadaverment. I admit to being old school in my tastes, and for me, my favorite death metal vocalists are the ones where you can follow the lyrics amidst the growls, such as Donald Tardy, Chris Reifert, or LG Petrov.  But, maybe this is not a deal breaker if you enjoy blood curdling death yells with hardly a semblance to humanity.

“Barbed Wire Asphyxiation” takes a brief break in the carnage for a surprisingly lush distorted bass lead, as the drums and guitar follow with a doom-paced breakdown.

Up next, “Coprsemine” explodes (get it?) with another barrage of dissonant death, before treating the listener to another temporary reprieve. This time, the guitar echoes through with an eerie arpeggio riff that reminded me of Tool, surprisingly.

“Mustard Gas Ulceration” is another high point, as the tone-rich bass leads with an ominous sludge yarn, to be joined by the guitar and drums in a whirlwind of old school one-footed blast beats and black metal style tremolo riffs.

I mention these songs because Putrefying Cadaverment grabbed my attention the most when they changed levels and shifted musical dynamics. This is a band who are quite capable at cranking out atonal compositions at extreme speeds with a human percussionist who could easily be mistaken for a drum machine, but what they lack in this album are a few good hooks. They capture the all-out bombardment of war, but are light on the atmosphere and charisma that makes death metal, ya know, fun to listen to. That’s right, I said the F word in an extreme metal review.

For me, the back end of the album dissolved into background noise set to the cadence of blast beats, as if a speed-addled John Rambo was furiously hammering out a manifesto on an old school typewriter. I again admit that war metal usually ends up being “snore metal” for me for its lack of variety and depth, so maybe this is a selling point to you if bands like Revenge, Diocletian or Gorgasm are your kind of poison.

Recommended listening only for the most KVLT of the WARKVLT.   2/5 stars.

About the Author: The Necrosexual is the most electrifying man in corpse entertainment. His upcoming album The Gory Hole Overture In F# is available for digital preorder here.