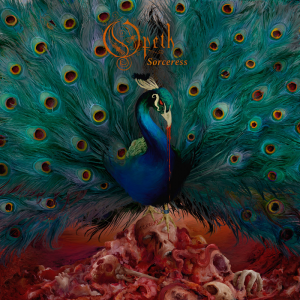 After 34 years of listening to a wide spectrum of musical genres, few bands that I’ve encountered have transcended labels and specifications to the degree that Opeth has. Most groups fit comfortably into a niche, but others defy description by such menial means. With Sorceress, founder and frontman Mikael Akerfeldt continues his magnificent musical progression.

Opeth has been called everything from black metal to death metal to prog rock, depending on who and when you ask. Early efforts embraced aggression, and while every album had their “chill song” the compositions were heavy as a rule and somber as an exception. Things changed markedly when the albums Deliverance and Damnation were released within months of one another. Both were dark and emotive, expressive and poignant. That is where the similarities ended. One was heavy, groovy and dirge-like, large and imposing. The other was delicate, sweepingly melancholy, and completely devoid of Opeth’s expected aggressive vocals.

In the past I’ve described Akerfeldt’s growling as “organic” and “carried on the wind” but without question it is brutal and threatening, especially to a stranger to death metal. On Damnation, the only singing to be heard was elegant by comparison; still wind-carried and majestic in its own way, but lovely to behold, pained and remorseful. This cleanly-sung departure was arguably the project’s first notable step away from coveting brutality, and towards embracing their current progressive rock persona.

At this point, during the composition of this article, I caught myself reveling in my personal adoration for the band and reliving their prior glories; to exorcise that demon, I’ll quickly detail my past with Opeth, then move on to the new album.

I have invested more into my relationship with this music than I have with most romantic endeavors. Many of my friends have as well; I’ve seen more tattoos of Opeth’s “O” logo than I have depicting any other musical project. The album Blackwater Park stands firmly among my three favorite albums of all time, and I enjoy no song by any artist more than I enjoy “Bleak” off of that record. At one of the greatest concerts I’ve ever attended, Opeth co-headlined with Nevermore at the Worcester Palladium and I managed to find myself onstage during the show. When I make my professional wrestling debut, I expect to use Opeth for entrance music. I’m a pretty big fan. 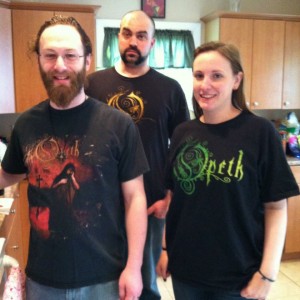 The author, center, finds himself and his friends in a moment of uncoordinated Opeth worship.

All of that said, I was devastated by the departure of drummer Martin Lopez in 2006, and I’ve gone on the record to say that their entire musical identity changed at that precise moment. Nothing against current skins-hitter Martin Axenrot, but I felt a drastic difference from that point forward, and when guitarist Peter Lindgren also left in 2007, I wondered how the band could possibly move on. In my opinion, we were given a glimpse into their future on the track “The Lotus Eaters” from 2008’s commercially-successful release Watershed. Feverishly heavy riffs behind haunting clean vocals slowed down and eventually gave way to a jazzy keyboard interlude that in no way resembled death metal. It was imposing and dark, but very different. I adored the brief, unexpected flourish, but would never have foreseen what it portended.

Skip ahead to 2014’s Heritage, an album that was well-received by a large contingent of their fans, but one that I personally did not enjoy. Akerfeldt dove headfirst into his progressive rock influences and, while entitled to create whatever music he desired, he forced his brainchild into a distinctly different demographic. Even with much praise heaped upon their more recent previous offering, Pale Communion, I turned a blind eye to a former favorite.

And now fast forward to October 2016. Esteemed Editor Jessie May gave me the opportunity to listen to new Opeth for the first time in over five years, and review it. I was terrified to listen to it and hate it, to have nothing good to say. I am overwhelmingly pleased to say that this is not the case. I told Jess that I would be honest, even if it hurt to do so, but this triumphant effort has restored my affection for a lost love. From the opening minute of the title track, Sorceress commands your attention.

It feels familiar, in many ways. With sweeping arrangements and impassioned vocals, it hits you in the feels, while at the same time wowing with progressive prowess and a few unexpected turns. Not to say that the changes are jarring; quite the contrary, when thick riffs yield to softer playing or the occasional cacophonous climax, the transitions are seamless. As one would expect from an Opeth of any era.

These songs don’t resonate with me emotionally the way that everything did before-and-including Ghost Reveries, but they don’t have to. I am a decade older, and to think on how much I have changed in the years between, it would be silly to think that the people who make the music we listen to don’t change while we do. The band is unquestionably continuing along the vein of progressive rock, if a label must be imposed upon them, but that is not necessarily a bad thing. Moments are still groovy, catchy and dark, or alternately morose, melancholy, and intricate. And if you could use a band’s name to encapsulate the genre that they fit into, “Opeth music” is a very accurate description of this effort. I might even argue that few bands have such a unique sound and delivery that you can bestow upon them their own eponymous genre; Opeth is doubtlessly one of them.

In a time when a popular band decides to create something different than their standard fare and can subsequently be crucified by a previously loyal fan base, Mikael Akerfeldt takes his project in whatever direction he desires. This album recalls former glory while stepping in a new direction, and it has regained an eager, longtime listener. If you are like I was, a former fan who may need a little nudge to check out the new material, or if you haven’t had the pleasure in the past, do yourself a favor and YouTube any of the released singles.

Review copy provided by Secret Service PR.  All opinions are our own.