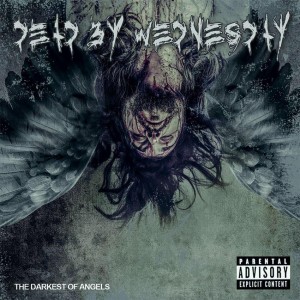 For a band that’s been hovering between “local” and “national” for several years, Connecticut metal outfit Dead By Wednesday’s recent release The Darkest of Angels may be the album that solidifies their foothold in the national arena.

Featuring thirteen guest vocalists along with full-time DBW singer Rob Roy, moving from track to track is like spinning Allegaeon’s Wheel of Subgenres.  For example, John Arch of Fates Warning delivers a standout performance on the title track; Brian Fair of Shadows Fall gives a rousing and completely dissimilar performance on “Live Again.”  This variety is a good thing most of the time, until it gets a little rap-metally for my tastes towards the end.

Beyond the obvious fact that different vocalists sound different, each singer co-wrote the song he is featured on.  (I would have liked to see a song with a female vocalist featured — the only woman on the album is Sarah Lacasse, who contributes subtle backing vocals to “Darkest of Angels.”  Edit: the band did approach several female singers for the album, but nothing worked out logistically.)  As DBW drummer Opus explained, “We wrote, performed, and arranged all the music.  Then each singer wrote the lyrics and vocal melodies.”  A few, including John Arch, even came back to the band with edits and suggestions on the music itself.

Addiction is The Darkest of Angel’s overarching motif, both lyrically and through the artwork.  According to the liner notes, DBW dedicates the album “to anyone who has suffered the effects of addiction with the hopes that the music can help inspire the strength needed for recovery…”  This topic will be no surprise to hometown fans, as longtime (and former) DBW vocalist Joe Morbidelli left the band due to substance abuse issues.

Songs like “Self-Medicate” don’t hide the theme behind too much nuance.  But even in tracks like “Donner’s Pass,” which is ostensibly about an ill-fated group of pioneers who turned cannibal to survive, the lyrics could be a metaphor for the destruction and betrayal brought on by substance abuse: “Children ate children / Mother ate child […]  Don’t think of their name / Or the look in their eyes / Now you’re not hungry, at least for awhile […] Feasting on human flesh / I can never go back.”  Only the band and guest vocalist Rob Dukes know for sure, but it’s possible.

Overall, The Darkest of Angels has enough mass appeal to take DBW’s music to a national audience and more than enough creativity (and shredding, Joey Concepcion!) to make them stand out from the crowd.  When these guys become big-time rock stars, don’t forget what local blog has been covering them for years!  *wink*