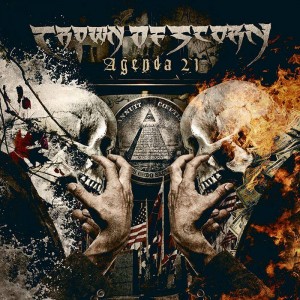 It’s probably no secret at this point that I only review things I like. Why would I do that, you may ask? Why not be objective, where’s my journalistic integrity? Honestly, I think giving press to anything I don’t enjoy or believe in is not only a waste of time and effort, but also counterproductive to The Cause. The Cause, in my opinion, is saturating our local habitat with worthwhile, outstanding music by gifted musicians and solid people. When something is shot across my bow that I dig, nothing makes me happier than spreading the word. Who wants to read about why I cringed while watching/listening to something? Drink your Haterade elsewhere. That said, if you like groovy, brutal metal, I’m telling you to pick up Agenda 21 by Crown of Scorn!

Perhaps that was a diversion, but Agenda 21 encapsulates my intentions writing for Alternative Control in the first place. Crown of Scorn is pure, good, healthy brutality. I wasn’t initially slated to grill it; I had deferred the task, I hadn’t heard of them and didn’t have the time. I’m beyond glad that I changed my mind. When you’re enduring an endless, bumper-to-bumper commute, pop in this CD. When your man/woman is text-nagging you, pop in this CD. When your health insurance deductible seems to cost more than your doctor’s summer home, pop in this CD. Agenda 21 caringly nurtures your blinding rage and encourages therapeutic headbanging.

The album opens in a threatening emptiness shattered by an imposing growling vocal line, joined a moment later by thundering drums and furious riffing. Here it begins with Depopulation Process, and does not cease for eight tracks of ruthless aggression. I do not in any way mean to suggest a lack of nuance, much to the contrary; everything from melodic catchiness during Corporatocracy to evil-sounding clean vocals during Earth Is No More shows a wide range of influence and ability from all of the musicians. You will hear blistering thrash alongside Southern-fried doom-sludge grooviness, and it is all placed precisely. Each composition walks a different path and provides unique scenery depicting the collapse of society. I haven’t gotten my hands on lyrics, and I am known among my friends to be famously bad at hearing the words in clean vocals, let alone growling and screaming. But with song titles like Blood for Currency and …Or Be Destroyed, it doesn’t look good for the human race. I can honestly say that, as each song ended, I experienced a resolution; they are full compositions with resounding conclusions. 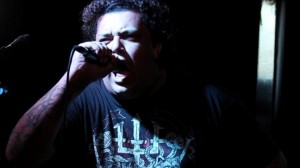 To me, Allyan Lang Lopes stands out in a Connecticut metal scene that embraces aggressive vocals. On the record he emerges as a force, whether employing a punishing, guttural growl or soaring with a higher timbre, screaming to wake the dead. At times, with several voices happening at once, it sounds like a cadre of demonic souls smashing through the gates of hell. All instruments contribute heartily to the robust sound and intricate arrangements. I cannot speak for how much of the composition founding guitarist Rob Cadrain was responsible for, but he has since parted ways, and the band consists of drummer Alan Alsheimer, sole guitarist Don Dumond, and bassist Steve Grayson. This group is incredibly tight on the album, flowing seamlessly between the speedier sections and transitioning flawlessly into the driving, head-nodding, fist-pumping parts. I truly cannot wait to see it in action, and pick up my physical copy of the CD.

Your next opportunity to support this outfit (and pick up Agenda 21) will be this coming Saturday at Bleacher’s in Bristol. Crown of Scorn will be supporting the release of both Eyes of the Dead’s The Sum of All Your Fears and Continuum’s 7. So you might have to buy three CDs… but do NOT miss Crown of Scorn’s set. 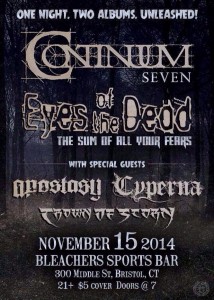 All the information you need for THIS SATURDAY’s show:

Crown of Scorn on the Book of Face:

What, are you calling me a liar? Listen to it here! But still buy the CD. They paid to make it.