San Diego instrumental metal duo Fermentor is about the release their fourth album, Continuance.  Cousins Dylan and Wally have been making music together in Fermentor since 2008, as well as playing together in the thrash band Beekeeper.

With many bands, a read through the lyrics will reveal nonmusical creative influences — but in the case of instrumental outfits, influences aren’t so transparent.  Dylan and Wally pull back the curtain by sharing some of their favorite movies, books, and video games, below…

This movie came out over 40 years ago and it still is scarier and looks better than any movie that comes out today. I love everything about this movie. The characters are interesting and believable and Ridley Scott directs them expertly. This film is filled with extremely tense scenes and H R Geiger created the crazies monster ever. It’s also scored by my favorite film composer Jerry Goldsmith. It is simply a great story with great characters, villains, music and it’s helmed amazingly.

No surprise that it’s another Sigourney Weaver film! This movie has been my jam almost my entire life. It’s one of those movies I can quote the whole way through. I genuinely listen to Elmer Bernstein’s score at least once a week. As a kid I wanted to be Egon Spengler. As an adult I am still inspired by the actor who portrayed Egon, the late Harold Ramis who also rewrote the script and made it the film we love. It was originally supposed to be about intergalactic ghost plumbers but it became a love letter to New York and one of the most densely nostalgic films ever. And yes it is true, this man has no dick. 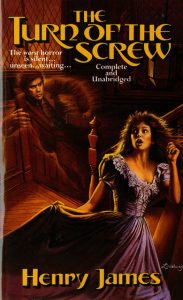 Dylan: The Turn Of The Screw by Henry James (1898)
This seems like normal haunted house book but once you finish it and reflect on what
you’ve read, do you realize the author may have been toying with you and now there is a completely different way of interpreting the book. It was the first book I ever read that had an unreliable narrator and it blew my mind. It taught me the extent to which an artist can get inside someone’s head.

Wally: Mixing With Your Mind by Mike Stavrou (2003)
I haven’t read much fiction since I was kid. These days I tend towards biographies, analysis, and technical books. Mixing With Your Mind is a compendium of Stavrou’s wisdom gleaned from decades in the trenches of mixing audio for music. It is not the rehashed knob-twiddling and gear drooling of many of this kind of book but instead a thoughtful and I’d say controversial approach to thinking about listening and how to approach mixing music in a constructive and artful way. This book is a hidden secret and I can’t believe I’m telling you about it. I may have to kill you now.

Dylan: Burnout 3 (2004)
I’m not much of a gamer but I have enjoyed many great hours with my friends simply seeing how many cars you can run of the road. This game has a mode called TAKEDOWN and it’s all about smashing!! I suppose with video games it’s more about who you play with than what you play.

Wally: Limbo (2010)
One day I was visiting a friend and had a few moments to myself. So I sat down to play video games for a few minutes. Upon booting up the console I see a game called Limbo. Two days later I have played through the game three times. Now this is not a typical game for the time. It’s a side scroller, there is no dialogue, no instruction. You are a child passing through dangerous environments and traps. A mistimed step results in a bloodbath as the character is torn to shreds on screen. Through those failures though is the only way to learn the game. You have to die over and over to exact the timings and ultimately survive and find the character’s lost sister. The mood and aesthetic is also top notch. Highly recommend!

Connect with Fermentor at the links below: