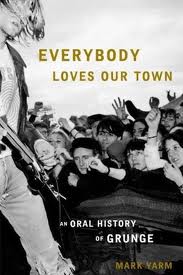 Krist Novoselic: We were these young people, from southwest Washington; we were Ill-equipped. We didn’t have the emotional support or the experience at all to deal with this. And we were just whisked away, whisked, whisked up into it and it went up, and up and up like the spaceship challenger. And then it exploded. It’s like, Dave and I landed, right? But Kurt didn’t.

For Everybody Loves Our Town (2012), author/editor Mark Yarm interviewed and collected old interviews from various band members, scenesters, and people who were around during the grunge era, and structured the interviews to tell the story of a region in America that became the last true “scene” to take over mainstream rock music.

It’s interesting now to read about “grunge” (sad comedy of life – everyone hates the word “grunge” yet it needs to be on the cover for anyone to know what they’re buying) some 20 years after it became so massively popular. As the bands became huge, there was always an undercurrent of not wanting “this,” which I always assumed was fame and success under the major label structure.

Twenty years later a lot of the layers get pulled back on the grunge onion. What makes Everybody a really fascinating read is the idea that most of these bands were way more calculated towards getting fame and a major label deal than they let on. It seems even during the late 80’s bands like Soundgarden and Alice in Chains were signed and ready to move up; there are way too many interview blurbs with various bands who speak about getting courted by major labels and taken out to dinner as if it’s a regular thing that happens to all new, unsigned bands. Seattle may have been an underground scene, and no one may have thought it was going to blow up as big as it did, but the bands, indie labels, and producers seemed to be ready for the wave to hit.

The book starts off like most scene histories do, with everyone talking about the early band/bands that came before the popularity. The U Men get most of the attention in this part, as their blend of art rock/punk rock and outrageous live stage show are raved about by almost everyone in the book. We then merge into Green River, featuring Mark Arm and Steve Turner from Mudhoney and Stone Gossard and Jeff Ament from Mother Love Bone, and later Pearl Jam. From here the book gets very jumpy in timelines, which makes you feel like you are talking to about fifteen very drunk people with short attention spans. We bounce from Green River and the early introduction of the word “grunge” (various people take the credit/blame for the word), take a trip further out of the city to read about the Melvins… And by the time we get back to Seattle, Green River broke up and Mother Love Bone and Mudhoney were formed in the wake. We then get a brief peer into the life and death of Mother Love Bone vocalist Andy Wood before we go back into Green River again. It’s maddening to read through, even if the stories are interesting, because you can’t ever fully take in what’s going on at any given time. 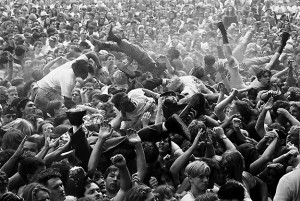 The scattered timeline tends to affect the book as a whole, but the stories really become interesting when mass culture descends onto the area. There are many stories of bitterness between bands that were signed and bands that weren’t, seeing your friends on the cover of Time magazine and MTV, and the entirety of your hometown being covered and dissected by a pre-internet tabloid media. Seattle (as the mantra repeats) went from sleepy coffee and logging town to the hippest place in the world, where everyone wore flannel and major labels and Tabitha Soren made weekly trips to scour through the clubs looking for the next big thing. The quote that sums this part up best is from a Geffen executive named Ray Farrell:

“At Geffen whenever we were going to go do Nirvana business you couldn’t get a flight from LA to Seattle because every flight was filled with major label guys looking for the next big thing after Nirvana. I’m serious. If you crashed every one of those planes you could have killed the record business singlehandedly.”

All of the success seemed to happen so easily, though; the book should have been called Everybody Was in the Right Place at the Right Time. Filmmaker Cameron Crowe decides to film Singles right before the scene gets huge and a year later the movie hits right at the apex of popularity. Krist Novoselic storms over to Sup Pop co-owner Bruce Pavitt’s house to demand a three album record deal and a year and a half later Nevermind is released on DGC with Sub Pop getting points on every sale. “Smells Like Teen Spirit” gets chosen to be in semi-heavy rotation by young MTV exec Amy Finnerty — and thus, Finnerty and MTV stumble onto the golden egg. Reading through Everybody, you get the feeling that you’re reading about the single biggest case of blind, almost miraculous happenstance in modern history. 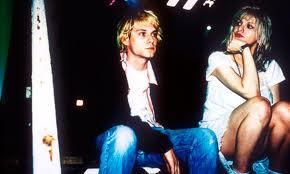 Regardless of the rise, you know how the story ends — which is what makes Everybody a very sad read at times. Heroin was a dark cloud over the scene even before it got popular and the drug seemed to clutch onto at least one member from almost every band. So many people passed away: Andy Wood via overdose (an interesting “what if” is that if Andy Wood lived of course, Pearl Jam would never exist), Layne Staley via overdose (and the darkest prolonged addiction in the book), Kurt Cobain via suicide, Stefanie Sargent via overdose, and so many more who all fell into the trap. Local record store owner Lilly Millic puts the first stages of heroin seeping into the scene best:

“When the junkie scene started taking over in Seattle by ’88, ’89, I noticed people weren’t trying to steal my beer as often, ’cause they were nodding out.”

The book isn’t all death and decay though; it’s really fascinating to read about a scene of bands become so insanely popular and covered. Since almost everyone was signed to a major label post-Nirvana, a good chunk of the second half of the book is filled with great stories about bands having to take off their cheap flannel shirt at photo shoots only to be outfitted with the $400 Marc Jacobs version and the now classic story of the New York Times calling up Sub Pop for some “Seattle slang” only to have receptionist Megan Jasper make up random words on the fly (example: “wack slacks” – old ripped jeans). One thing about that scene that was great was the utter sarcasm of it all, which tends to be buried under the pile of heroin when books are written.

The real thing to take away from Everybody is that none of this will ever happen again and honestly it’s completely fine that it won’t. The “Seattle scene” is the last pre-technology, pre-tabloid, pre-downfall of record industry scene. None of the events that happened in Everybody could be replicated because the entire set-up is gone. The whole system is reversed now, which makes it great to read about the early days of Sub Pop and a peer into the last vestiges of how the industry makes stars.

Overall, Everybody is an easy read if you know the story but a difficult read if you are coming into the era cold.  Everybody does benefit from time, as the seemingly endless books and documentaries released in the late 90’s/2000’s came off as being too soon to do the retrospective. Everybody is worth it if you remember the era and want to hear stories with a bit more distance and perspective from the men and women who were involved in it.