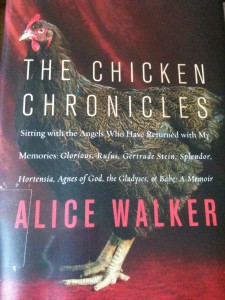 I had a little time to spare one day before picking up my husband from work. I pulled into the Harry Bennett Branch Library on the Turn of River campus. I rushed in, trying not to look at the source of all my junior high angst, looking for a book called The Believing Brain. They did not have it. Story of my life. The book is supposed to be about the physical differences in the brain between believers and non-believers, it could have answered so many of my questions. But, alas, those questions were to go unanswered (for now). As I wandered around the new book section a chicken jumped out at me – a chicken on the cover of a book that is.

The Chicken Chronicles by Alice Walker. Looked good to me, I love chickens. I took advantage of the self-checkout, grabbed my book and left. In the car I took a photo of the cover and announced to the entire Alternative Control staff I’d be writing a book review.

First of all, I must admit, I had no idea who Alice Walker was. Apparently she wrote something called The Color Purple, along with dozens of other books: fiction, non-fiction, and poetry. Being pretty much ignorant of her body of work I found myself rushing off to use the Google a few times in the first chapters. She mentioned she had a “partner” and I quickly searched the internet to find she’d been married to a Jewish man when that kind of thing just wasn’t acceptable in this country. Later in life she was in a relationship with Tracy Chapman. These little facts grab my interest; clearly the author colors her purple outside of the lines. This I like.

The book is simple, folksy; numerous small chapters that are mostly letters to her chickens. Sometimes I found it hard to follow, the sort of “free-thought” flowing from her pen, referencing her seemingly endless life experiences. Maybe if I knew more about her and her body of work I might have been able to grasp the meaning. It is, after all, her memoir – not really the chronicles of chickens.

About halfway through the book she completely lost me. She equates the death of Michael Jackson to the death of a chicken.

I’ll just let that hang for a moment.

Then she has a 6 ½ page poem titled “St. Michael, Lover of Animals and Children.”

Yeah. I could only stomach a few stanzas before I had to turn to the next non-Michael Jackson praising chapter. Talk about strange constructs of the brain. Walker doesn’t believe in heaven but she clearly places a rumored-but-never-to-be-proven child molester up on a pedestal like a god. Go figure. To be honest this really took me aback. Does she think OJ is innocent, too? Clearly she feels strongly about Jackson, and I can recognize her brave choice to include this in her memoire; this is a polarizing subject, worshiping potential child molesters. However, the book would have been better served if she’d left out the controversial topic; it overshadows the entire second half. No matter how poetic or intelligent her observations are, you think this woman who writes to chickens has got to be nuts.

And she’s not. Some of the most powerful sections of the book illuminate the brutal truth of the food chain. This is where I wish she had stayed, but I guess it’s not that kind of book. Stories of her youth, wringing the necks of chickens for dinner and the whole community coming over to butcher a hog, those were the little tidbits I found most interesting.

I laughed out loud a few times, the biggest laugh came when I read a steak, potato and salad dinner in New York once cost $1.49. But overall the book was not what I wanted it to be. Again, story of my life. Much like my reaction to The Vagina Monologues, I thought it would have been better if I’d written it. But, I guess it wasn’t my memoir. And it’s not the chronicles of chickens, either.

If you’re an Alice Walker (or Michael Jackson) fan read the book and start sending me hate mail. If you’re not, feel free to skip it; or use it as a bathroom book. You’ll know what to do with those middle pages.

Next time I’ll get the book I want. Believe it.